There’s never a shortage of drones at CES 2018 these days, but if you look past all the hexacopter and quadcoptors designed for extreme performance, DJI unveiled something uniquely simple with the DJI Tello. Unlike the company’s previous products, the $99 (£99, AU$169) DJI Tello is more of a tiny flying toy to help kids and starting filers into the air.

On top of that, the Tello is bringing some unique features not seen on a DJI drone before including mid-air flips, livestreaming and the ability to program your airframe. Furthermore, the drone is packing some smart tech courtesy of Intel to make it safe to fly safely and easily indoors.

While you’ll find this drone listed as an DJI Tello on B&H Photo and even DJI’s own storefront, this tiny flier is actually the product of a Chinese startup called Ryze Tech. DJI is helping provide flight stabilization technology and selling the tiny flier under its brand and on its online store. 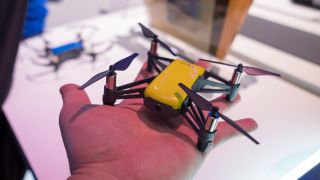 The DJI Tello really is a little dinky thing when you first see and hold it. Whereas we could hold the DJI Spark in an outstretched hand, the DJI Trello neatly fits into just the palm of our hands. Measuring just 98mm x 92.5 x41mm and weighing 80 grams, it’s an incredibly small drone compared to the rest of DJI’s lineup.

Tininess aside, there’s a clear relation between the Tello and the Spark. Both drones share a similar two-tone look and body shape. That said, the Tello gets rid of redundant landing gear and instead extends the bottom of its rotor arms to act as its feet. The result is an even shorter, more compact air frame that should be easier to fly indoors. 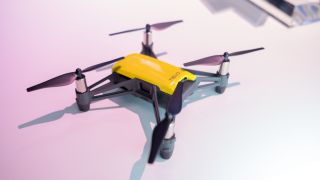 The Tello is essentially a smaller DJI Spark in every way. It packs the same flight stabilization technology and Intel Movidius Myriad 2 VPU in the company’s last micro drone. This means you can launch the drone from your palm and control it with hand motions like a Jedi.

Unfortunately shrinking things down has led to some downgrades. The drone’s camera utilizes a 5MP sensor that can only record 720p videos. The Spark has a 12MP camera capable of capturing Full HD 1080p footage.

Flight time also cuts off at a maximum 13 minutes compared to the Sparks 16 minute battery life. Still, it’s astonishing a drone this small can fly so long. You won’t be going anywhere quick with this drone either. Its max speed tops out at an 8m/s and you’ll only be able to fly it outside when it isn’t windy at all. 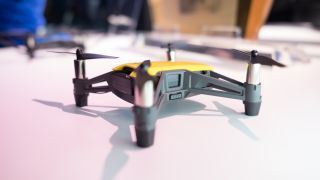 On the plus side, you the Tello pulls of a few tricks you won’t find on DJI’s other drones. For one thing the control interface includes a flip button for being fancy in the air or dodging any Nerf darts at a party. There are also several flight modes including ones to shoot a quick 360-degree video or have the drone fly away and upward from you in one smooth motion.

DJI Tello owners will also be able to program their own flight patterns at home using an included coding tool called Scratch. We haven’t had a chance to try it ourselves, but we’ve been told it will be simple for everyone to plot their aerial maneuvers.

With an Google Daydream VR-like phone holder, Tello owners will also be able to jump into a POV flying experience. Previously, all of DJI’s other drones required a proprietary VR headset. 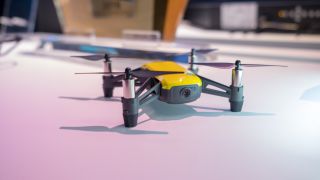 It’s easy to write off the Tello as a $99 (£99, AU$169) toy drone, but it brings some serious performance to the world of tiny drones. With 13-minutes of flight time and all the motion based controls, it’s a much more accessible than just buying another cheap toy drone you’ll crash land within minutes of your first flight.

The Tello isn’t just DJI’s smallest and cheapest drone, it’s also their most fun flier yet. The abilities to flip with a single tap and quickly pop into a POV mode with your phone can’t be discounted. We can’t wait to give this drone a full review when it arrives this March.
Posted by Unknown at 04:57