The MacBook Air hasn’t seen a substantial upgrade in three years now, but it still comes recommended nonetheless. As it’s been a staple in Apple’s portfolio ever since its induction in 2008, this laptop is the only one you can – to this day – purchase brand new with the Cupertino signature LED-illuminated backplate.

In the time that’s passed since the last major MacBook Air refresh, we’ve seen several revisions to Apple’s clearly more prioritized MacBooks, namely the 12-inch Macbook and 13- and 15-inch renditions of the MacBook Pro, but there’s been no overhauled MacBook Air in sight. That hasn’t stopped it, however, from continuing to inspire some of the best Ultrabooks around, nor does it disqualify it from our four-star review.

Just the opposite really. You see, the MacBook Air thrives in spite of its antiquities. Whereas the MacBook Pro has a powerful 7th-generation Intel Core processor, the MacBook Air cares more about utility over sheer might. It’s the only MacBook remaining, in fact, that has traditional USB ports, Thunderbolt 2 and an SD card slot. It’s also the only one with the long-heralded MagSafe 2 connector for charging.

Eventually, this mildly spec-bumped 2015 MacBook Air is going to be outpaced by the latest version of macOS, but not for quite some time. Both macOS Sierra and macOS High Sierra are compatible with Macs dating back to 2009. Read on for our full-length MacBook Air review, complete with all the stats, facts and personal impressions you’ll need to make an informed purchasing decision. But first, let’s talk about the way this thing looks. 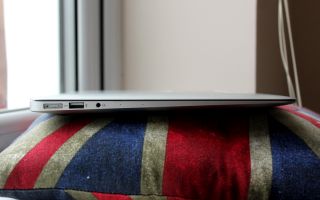 By and large, the MacBook Air generally looks the same as it has since 2010, and there don’t appear to be any changes in tow, either. That’s a shame, particularly because we’re now seeing virtually bezel-less laptops with smaller footprints and high resolution screens that dismally put the MacBook Air in its place.

Forget the Dell XPS 13"s physics-defying InfinityEdge display, which is lightyears ahead – even Apple"s 13-inch MacBook Pro with Retina, once seen as slightly tubby compared to the Air, has a smaller footprint and takes up slightly less space on your lap. 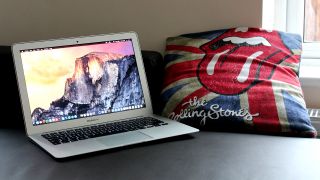 Yet, the old ‘if it ain"t broke’ mantra applies – at least to a point. The MacBook Air"s aluminum unibody design, which supports the main enclosure and the display, is as durable as ever. Its lid can be easily raised with a single hand and doesn"t droop in any position, and you have to press really hard to detect flex on the machine"s base or lid.

It"s also easy to clean with a damp cloth. If there"s one drawback, it"s that the aluminum body can scratch easily to leave permanent black marks, so you should consider buying a sleeve if you"re going to sling it into a bag for transportation.
Posted by Unknown at 16:03