Tesla, the electric car maker has recently rolled out a software update, 2017.44, that has a new acceleration mode. It is simply called Chill. In the settings of its touchscreen display, Tesla has described the mode as follows.

“You can now choose between two acceleration options in your vehicle: Chill and Standard. Chill makes acceleration more gradual – ideal for smoother driving and a gentler ride for your passengers.” 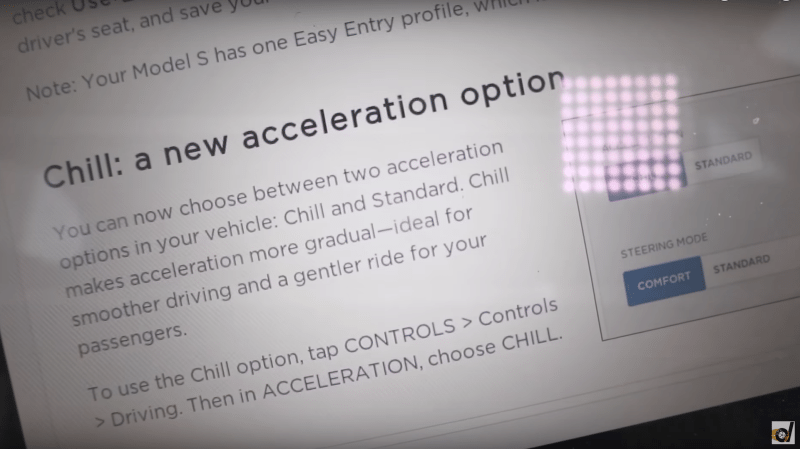 Screengrab via DragTimes on YouTube[/caption]

According to the release notes on Electrek, this mode is the inverse of the company’s Ludicrous mode. It softens the throttle and delivers a smoother and calmer acceleration. Electric cars are known for their instant torques and extreme accelerations, but it seems like there are people who prefer a smooth acceleration.

The standard mode hits 0 to sixty in little under four seconds. However, when the vehicle is in the Chill Mode, it goes from zero to sixty in 7.2 seconds. This might seem too slow for some people, but for those who are in the mood for some lazy driving, this is ideal. According to Tesla, Chill Mode is "ideal for smoother driving and a gentler ride for your passengers."

This update is available for the Tesla Model S and Model T. it is unclear if Tesla’s budget vehicle will get the feature too.

The update, 2017.44 brings another significant update to the vehicles from this electric automaker. This is a feature called exit mode. This is a feature that is present in many luxury vehicles nowadays. When this mode is switched on, it automatically adjusts the steering wheel as well as the seat when entering and exiting the car. When the driver sits in place in the car, the wheel and the seat move back to the original position. This is a handy and luxurious feature that many Tesla owners will appreciate.