The iMac Pro, which we first saw back in June 2017 at WWDC, is out now and starts at a price of £4,899/US$4,999. In this preview and first look we reveal everything you need to know about the new iMac Pro, and what it might mean for pro customers.

Just what does the iMac Pro offer, and who will benefit the most from this super iMac? 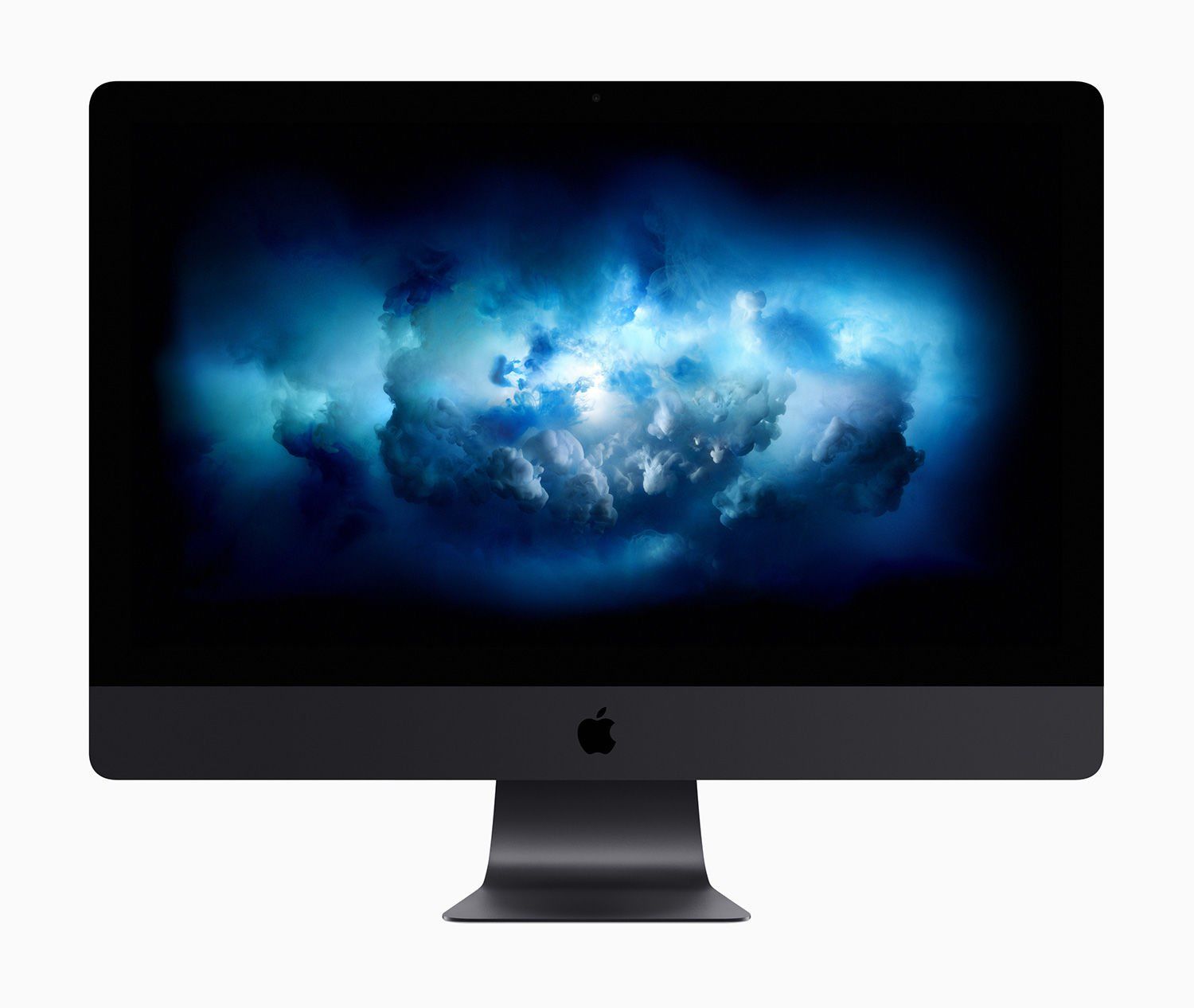 What is the iMac Pro?

In a nutshell, it"s a supercomputer, offering workstation-class processors and graphics encased in an iMac shell - which means you also get a 5K Retina display.

This is a computer for people with very specific needs. With a starting price of almost £5k, it"s not something that your typical Apple fan will be rushing out to buy. This is a machine for professional creatives who need the extra cores and the ultimate graphics power it will bring.

But, it seems, the target audience shouldn"t be too power-hungry, because there has to be someone whom the Mac Pro, arriving in 2018 or later, will suit.

Speaking of the Mac Pro, should these creative pros be wary of signing up for a machine that might not be upgradable in the future, as was the case with the Mac Pro?

The Mac Pro wasn"t only not user-upgradable, it turned out that Apple couldn"t upgrade it either, hence having to go back to the drawing board and completely redesign the Mac Pro, as we discuss here: new Mac Pro news.

The iMac Pro offers workstation-class Xeon processors with up to 18 cores. If that"s overkill for your needs, the standard model ships with an 8-core processor and there are 10- and 14-core processors on offer too.

Apple is also boasting that the new iMac Pro processor will have a cache of up to 42MB. Processor cache is similar to RAM: it"s memory for the processor and means that common CPU tasks can be accomplished quickly.

Any multi-core CPU will have at least three levels of cache: level one, two and three, or L1, L2 and L3. Macs with Kaby Lake processors have L1 cache of 64KB per core, 256KB of L2 cache, and 8MB of L3 cache, so this looks like something worth bragging about. Some CPUs offer L4 cache at 128MB, however.

For more information, here"s How to choose the Mac with the best processor for your needs.

One reason why there has been a wait for the iMac Pro is Apple"s determination to use the new AMD Radeon Pro Vega GPU. AMD says that Vega delivers its biggest graphics improvements in five years. 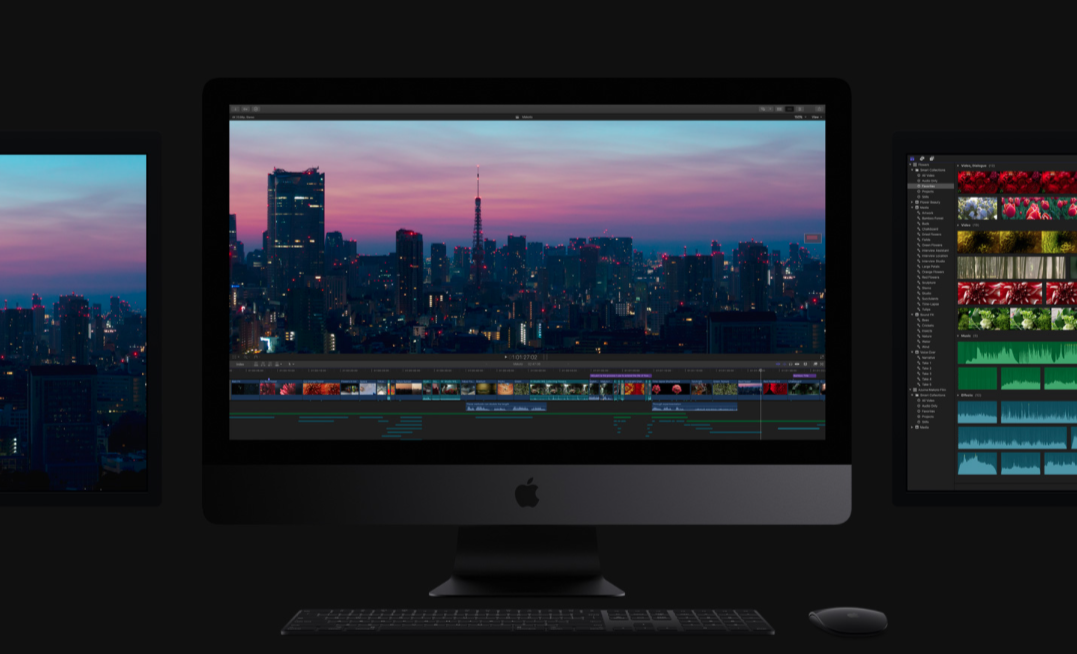 We know that the Radeon Pro Vega 64 is one of the options for iMac Pro buyers, but it isn"t clear at this point if this is the standard or a build-to-order choice. The Vega 64 offers 13 teraflops at single precision and 25 at half precision.

We had previously felt that the Vega 56 (which offers 11 and 22 teraflops respectively) was a more likely standard offering, and this may prove to be the case. Both the 56 and the 64 are bang up to date, having launched in December 2017.

The Vega 64 offers 16GB HBM2 memory compared to the 8GB offered by the Vega 56, while Apple claims that the Radeon Pro Vega graphics card will offer up to 8GB or 16GB on-package high-bandwidth memory.

The standard 27in iMac offers up to 8GB VRAM on the Radeon Pro 580 card. So the promise of 16GB HBM2 memory represents quite a leap (note, that"s standard video memory versus high bandwidth memory). Apparently the Radeon Pro Vega is over three times faster than any previous iMac GPU.

What all this means is that the new iMac Pro should offer a graphics solution that would be able to, for example, play back 4K H.265 video in real time without transcoding.

The iMac Pro will offer an impressive amount of memory: up to 128GB DDR4 ECC memory, according to Apple. However, it will offer 32GB as standard, and a second configuration of 64GB.

With all that memory, users will be able to run multiple applications at once, but more crucially for the target market, see increased rendering speeds.

The 27in standard iMac is configurable to 64GB DDR4 memory. The 27in iMac RAM is user-accessible thanks to their RAM slots on the back.

There had been hope that the iMac Pro"s memory would also be user-accessible, but we are increasingly suspecting that this is not the case: early images suggest there is no door in the back to get at the RAM. We will let you know as soon as we know for sure if the iMac Pro can be upgraded by the user.

While the new iMac Pro will offer a 1TB SSD as standard, Apple says it will offer up to 4TB SSD and that this solid state storage will offer 3GB/s throughput (which is pretty standard on Macs).

In practical terms, the amount of storage you need will depend on whether you"re working with particularly large files. You could of course work from a RAID storage device but the fastest speeds will be achieved if your files are stored on the internal SSD.

The display is the main thing that, in the absence of any other specs, sets the iMac Pro aside from the Mac Pro. However, we do know that Apple is intending to launch a separate display to go with that machine when it launches and we expect to be suitably impressed when it arrives.

In the meantime, the 27in screen on the iMac Pro will offer the same 5,120x2,880 resolution 5K Retina display, with the same 500 nits of brightness across its 14.7 million pixels, P3 colour gamut and support for over a billion colours, as the standard 27in iMac.

Apple has announced no plans to make the iMac Pro screen a superior choice.

The iMac display is capable of supporting 10-bit colours despite being limited to 8-bit (Apple says 10-bit displays are prohibitively expensive). Apple achieves this via 10-bit spatial and temporal dithering - which essentially means the iMac shows extra colours by changing the colours it"s displaying so quickly your eye can"t see it and just registers all the colours as if they were shown at the same time.

Who will this matter to most? It will be great news for photographers because it should reduce banding on photos, for example.

However, as we said above, this display is no different to that of the standard 27in iMac, so no reason to buy the Pro version.

Could Apple look at producing a 10-bit display for the new iMac Pro? Probably not yet, but it could be something to look out for in a future update.

There have also been calls for Apple to offer a bigger screen on the iMac Pro: 28, 29, or 30in being the dimensions requested.

However, since you will be able to hook up four displays to your iMac Pro (depending on their resolution) the size and quality of the display may not matter to you.

You could, for example, hook up four 4K displays or two additional 5K displays. And because High Sierra supports 10-bit colour you can hook up a 10-bit display if you want to.

Speaking of which, it would be incredible if the new display Apple is intending to launch alongside the Mac Pro is 10-bit. Read more rumours about the new Apple display here.

You can connect two additional 5K monitors for a whopping 44 million pixels. Alternatively, you could hook up two high-performance RAID arrays and enjoy 40Gb/s transfer speeds.

One thing it offers that the standard iMac doesn"t is 10Gb Ethernet. The standard Mac offers a Gigabit Ethernet socket. This means that sharing files between desktops, or working with high-performance network storage, will be up to 10 times faster 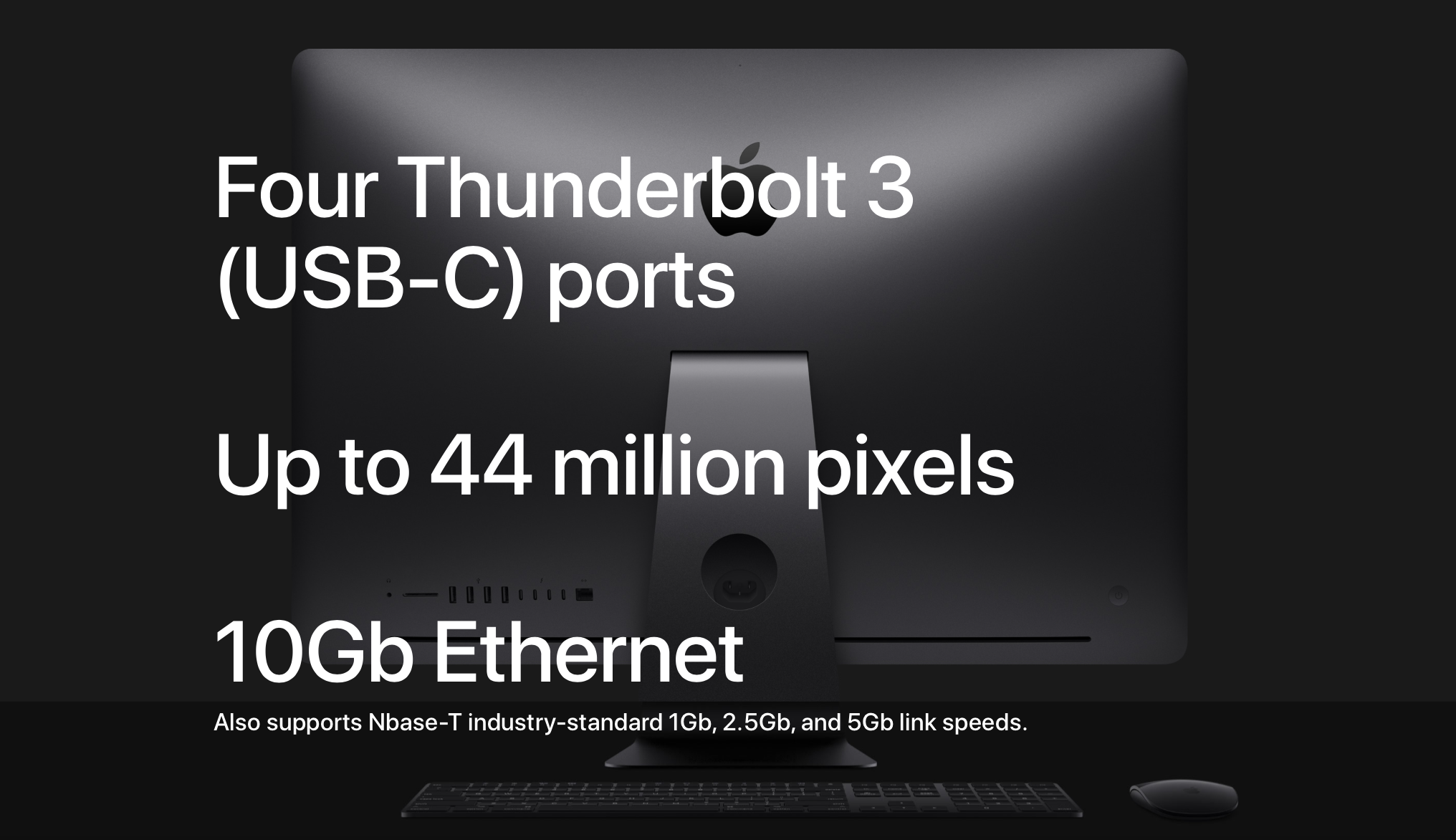 It will offer four standard USB slots, along with four Thunderbolt 3 (USB C) ports on the rear, two more than the standard model, alongside a SDXC card slot and a headphone jack.

Other enhancements include enhanced stereo speakers, which Apple says deliver broad frequency response, rich bass and more volume. Until we test this we won"t really be able to comment further.

The most noticeable design change is the Space Grey case of the iMac Pro, which gets brand-new Space gGey accessories to match the new look.

These include a new Magic Keyboard that includes a numeric keypad (like the new one on the 2017 iMac) and a Space Grey Magic Mouse 2 or Magic Trackpad 2.

However, the real design changes are on the inside. Apple has had to completely rethink the thermal architecture in order to house the new components.

Apple designed an entirely new fan system that offers an 80 percent increase in cooling capacity. This is necessary if the iMac Pro is to handle 500 watts and stay cool. That"s 67 per cent more power than the standard iMac.

So Apple has completely redesigned the thermal architecture of the iMac for the iMac Pro. Inside you"ll find dual blowers, a massive heatsink and extra venting, according to Apple.

Based on what we"ve seen of this, it looks like the iMac Pro has two fans plus a pair of horizontal vents across the bottom, while a regular iMac has a single fan plus one vent.

As a result of its design tweaks, Apple claims it has achieved 75 per cent more airflow and an 80 per cent increase in system thermal capacity.

Hopefully it will be a success because, as Apple itself admitted back in April 2017, with the Mac Pro the company designed itself into a bit of a corner in terms of the way that device coped with heat. (Read more about what Apple revealed at this briefing here.)

Given the fact that Apple made much of its groundbreaking design based around thermal cores at the time the Mac Pro was announced back in 2013, we really hope that this time Apple has come up with a more future-proof solution.

The problem with the Mac Pro is that it was not possible for one side of its triangle-shaped motherboard to get much hotter than the other two sides, which limited Apple in terms of which CPUs and GPUs it could use with the machine.

As a result, Apple was left with a Mac that was impossible to update.

Who is the iMac Pro for?

As for who the iMac Pro is intended for, it was during the April 2017 briefing where Apple announced its plans for the new Mac Pro that Apple also announced that the iMac had proven to be popular with the traditional Mac Pro audience and as a result it was planning to create an iMac with those users in mind.

Apple had already revealed that the Mac Pro addresses the need of a very small niche, so the iMac Pro will shave off some of these users which are likely to include video editors, 3D animators, audio engineers, software developers, and scientists.

Another machine that has a similar price is the 27in standard iMac, which, if you choose all the build-to-order options available, tops out at £4,949. Is that a comparable machine? Not really, although it may well meet your needs in a way that the iMac Pro won"t.

Wondering which of these two iMacs is for you? The iMac Pro offers more than four cores, more RAM, and a bigger SSD, as well as the Radeon Pro Vega graphics card - and if you need any of those things then, at least for now, it"s the only option.

If money isn"t an issue the iMac Pro looks like an excellent choice, especially when you consider that despite Apple"s reputation as an expensive choice, the competition at this end of the market is generally a lot more expensive.
Posted by Unknown at 04:26