Some VPNs struggle to make themselves stand out from the crowd, but VPN Proxy Master isn"t one of them. The website boasts that it"s the "world"s fastest free VPN", and with a reported 60 million plus users it seems likely that it"s doing something right.

The free service has plenty of ads. There are animated icons begging to be clicked, full-screen video ads which demand you "wait 5 seconds to skip", another ad embedded in the Disconnect dialog – and unexpected notifications if you"ve left the service turned off.

There"s no support for torrents, and the apps warn you that any torrent use could get your account deleted. This could be a hassle for some, but it"s no real surprise for a free service, and at least it means there"s more bandwidth left for everybody else.

Plus points include instant access to the network, with no signup, no usernames, and no need to hand over your email address or other personal details.

There are no annoying bandwidth restrictions, either. You can use the service as much as you like.

If you need more, upgrading to the paid VIP service drops the ads and gets you access to faster servers and more locations (Canada, Germany, India, Japan, Russia and South Korea). Monthly prices are steep at $11.99 (£9.60), but choose the annual plan and this plummets to $3 (£2.40). There"s an entirely free seven-day trial, and you can get an extra seven days for every friend you invite to use the service.

The company claims it runs a ‘no log’ network, stating: "We do not collect any information regarding the websites you visit or the IP addresses assigned to you when you access the VPN Master Private Network, and with respect to our VPN service, we do not collect any data stored on or transmitted from your device, including any data that applications on your device may transmit through our network."

This is essentially the ‘we don"t log what you"re doing online’ statement made by just about every VPN, although there"s a welcome extra detail. There"s no logging of outgoing IP addresses assigned when you connect to the service, a trick which could help trace an internet action back to your account.

Another clause might rule out some session logging: "...any browsing information or other similar information relating to your online activities transmitted by you to our servers when using VPN Master is cleared after your VPN ‘session’ is closed."

This could mean VPN Proxy Master isn"t recording the bandwidth used in a session, although it"s hard to say for sure.

There"s scope for the service to be logging your incoming IP address, and we"d like to see this explicitly discussed in the privacy policy. But whatever the company might collect, free plan owners don"t have to hand over an email address or other details, so there"s little to connect any action back to you. 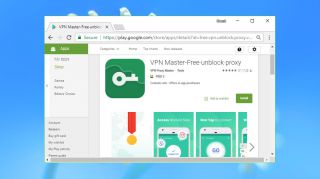 Be very, very careful when searching for VPN Proxy Master on your mobile app store. There are a host of other apps which use very similar names and logos, presumably hoping you"ll not notice and install them, instead. Ideally, follow the download links from the official app site, or otherwise look for an app called ‘VPN Proxy Master- Free Security’, with the developer listed as VPN Proxy Master.

Once you"ve located the right store page, everything else is easy as there"s no need to create an account or hand over any details. All you have to do is install and open the app as usual.

The interface is almost as simple. A big ‘Go’ button automatically connects you to the fastest server, or you can get specific and choose your preferred location from a list. Server load indicators help you make the best selection, and you"re also warned if a server is full (at least one of the three US servers was always marked as full during our review).

The free version has plenty of ads, including annoying full-screen pop-up video types with timers to prevent them being closed immediately. They mostly appear when you"re performing some app task, though, so if you just leave VPN Proxy Master running in the background you"re unlikely to be hassled.

VPN Proxy Master"s Google Play page says it "encrypts data using OpenVPN protocols (UDP/TCP)". That sounds great, as OpenVPN is fast and secure, and experienced users will appreciate the control over how OpenVPN works – but we stumbled across a problem. We couldn"t see any option to switch protocols or see what protocol you"re currently using, and when we checked our device settings, the app seemed to be using a regular Android connection rather than OpenVPN.

Curious about this, we sent the company a question via its official email support address. We asked: "Your Google Play page says the app supports OpenVPN TCP and UDP, but it looks like it"s using a regular connection. Which protocols do you actually support?"  The app tagged a footer onto our email making it clear that we were using an Android device in the UK.

A couple of days later, this reply arrived (we"ve not edited it in any manner):

“But we do not want to lose you as our good friend, if it is ok, we would like to tell you the following ways:

1. You may need to cancel the subscription at first, and about this problem, please contact with Apple"s official customer service, or use the link (https://support.apple.com/en-au/HT202039) to cancel it. We have no right to cancel vip for IOS users. We apologize for the inconvenience again.

2. If you want to download our product, i would like to introduce the other products for you:

But now we could not provide in China and with Chinese, hope you can understand us, thanks.”

That"s a very long way from being helpful, but it"s useful as a measure of the support you can expect from VPN Proxy Master (nothing at all). It"s also interesting to see how the reply appears to suggest all these other apps are also "our product", even though the app pages have several different developer names: Express Limited, Chen Lan, Li Chen, All Connected. How are they connected, and who is really behind the service? Your guess is as good as ours.

During early testing, we noticed an odd issue with the free UK server, which our checks suggested was actually in Germany. That"s not very helpful if you need to access a UK resource.

Performance was disappointing in our tests*, especially for a service claiming to be the world’s fastest free VPN. Our best European speeds reached an acceptable 16Mbps, but UK to US connections managed an unimpressive 10Mbps and Singapore peaked at 4Mbps.

The service did better at site unblocking, allowing us access to Netflix, YouTube and Comedy Central. BBC iPlayer was the only service VPN Proxy Master wouldn"t allow us to access, which is not surprising when its UK server isn"t actually in the UK.

Would upgrading to the commercial VIP plan make any difference? A "Try Free VIP" tab looked promising, but tapping it just gave us a ‘Sync VIP Information, please wait a moment’ message that stayed unchanged for the next 30 minutes, and the following two times we tried it. Eventually we found a second "Try" option in the Upgrade screen, and that worked immediately, setting up an automatic subscription but not taking any payment for the first seven days.

Getting rid of the adverts was an immediate relief, and the upgrade also allowed us to choose locations from the Faster Server tab. Two of these were conveniently labelled as "for Netflix", so hopefully you won"t have to try multiple servers to find one that works.

Our streaming tests ran as before, with all our test sites accessible except BBC iPlayer. There was a different reason, though: the VIP server labelled as being in the UK appeared to be in the US. (Sigh).

The review ended on a positive note, at least, as we ran through our privacy checks. Ipleak.net, doileak.com and other websites didn"t reveal any DNS or other leaks.

VPN Proxy Master isn"t as fast or as capable as it pretends, especially with the UK server which isn"t in the UK, but let"s be realistic – there aren"t many other free VPNs that can unblock Netflix and give you unlimited bandwidth. In that respect, it’s worth a try for mobile devices.

*Our testing included evaluating general performance (browsing, streaming video). We also used speedtest.net to measure latency, upload and download speeds, and then tested immediately again with the VPN turned off, to check for any difference (over several rounds of testing). We then compared these results to other VPN services we"ve reviewed. Of course, do note that VPN performance is difficult to measure as there are so many variables.
Posted by Unknown at 18:15