Samsung has invested big in the audio space in recent years, including building a state of the art audio laboratory in California. That investment seems to be paying off handsomely, too, if the class-leading K950 and MS650 soundbars we’ve seen this year are anything to go by.

With this in mind we were pretty stoked to get our hands on the MS650’s smaller sibling, the MS550. If this can get close to the performance of the MS650 while saving you £100, it could be a pretty much perfect option for replacing the likely feeble speakers built into your TV.

The MS550 isn’t as outright glamorous as some of today’s soundbars. It’s superbly well built, though, with enough weight and robustness to raise hopes it will pack almost as powerful a punch as the MS650 without succumbing to unwanted vibrations, rattles or dropouts.

The brushed metallic finish on the top edge looks stylish but serious too, while the grille on the front edge looks crisp and no-nonsense. It’s great at this price point, too, to discover an LED display under the right hand side of this grille that tells you which input you’ve got selected.

The projector’s bottom edge carries screw points for fixing the MS550 to the wall if you wish, using a ‘One Mount’ system you can pick up for around £70 at the time of writing.

There’s also a recessed section on the bottom edge containing the soundbar’s connections. These include a handy power loop through so you can power a Samsung TV through the soundbar; an optical digital audio input; a 3.5mm auxiliary input; an HDMI loopthrough; and a powered USB port you can use for either recharging your portable gear or playing media files from USB sticks.

There’s no second HDMI input like you get on the K850 and K950 Dolby Atmos models. However, since the MS550 doesn’t support Atmos you could easily connect your TV to the soundbar using its HDMI’s audio return channel (ARC) capabilities, so that your TV effectively becomes the soundbar’s switching box.

The MS550 is smaller than the MS650: 890mm versus 1060mm wide, and 69mm versus 76mm high. This height difference makes the MS550 significantly more likely to fit under the frame of a typical TV when sat on the same piece of furniture.

Design TL;DR: The MS550 is beautifully built and looks like it should cost much more than £399. It’s impressively compact, too, considering how much power it’s got... 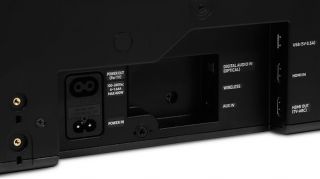 Being that much smaller than the MS650 does mean there’s less space for speakers in the MS550. It only gets six drivers versus the MS650’s nine: four main drivers, and two wide-dispersion tweeters.

It’s specifically designed to offer a tidy one-box solution, though you can if you wish add Samsung’s SWA-9000S wireless rear speaker package for a true surround sound experience. Bizarrely, at the time of writing one or two stores online seem to be offering a MS550 plus 9000S package for the same price as the MS550 alone!

While it might not have as many built in drivers as the MS650, the MS550 does retain the same proprietary Samsung distortion cancelling technology. This should allow it to deliver levels of bass and volume that such a compact unit normally couldn’t achieve without the sound becoming fuzzy, compressed, harsh or unbalanced.

The MS550’s connectivity initially looks exemplary, with both Wi-Fi and Bluetooth streaming available alongside the ‘hard’ connections mentioned earlier. Thanks to these wireless options, the MS550 can play stuff stored on networked or Bluetooth devices; can be integrated into a wider Samsung multi-room speaker set up; and can be controlled/set up via Samsung’s MultiRoom app for iOS and Android. 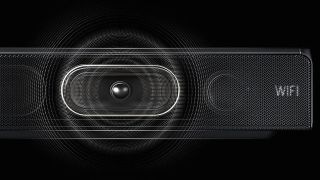 It turns out, though, that the MS550 suffers one significant connection shortcoming versus the MS650: no support for 4K and HDR on the HDMI passthrough. This means that you can’t pass video through from a 4K Blu-ray player without losing the latest video disc format’s key resolution and light range advantages.

This isn’t the end of the world. You could always connect a 4K Blu-ray player’s HDMI output direct to the TV for 4K HDR, and then connect its optical digital audio output - or its dedicated audio HDMI if it has one - to the soundbar. It’s something else worth worth considering, though, if you’re trying to decide between the MS550 and step-up MS650. As is the fact that the MS550’s speakers work in a 2.0-channel configuration versus the 3.0-channel set up of the MS650.

Getting back to the good stuff, aside from the buttons you have to press to add speakers or get the speaker onto your Wi-Fi system being unhelpfully placed on the speaker’s underside, the MS550 is admirably easy to use and set up. Especially with that little LED display on hand to always help you know where you are.

It also supports a good range of multimedia files, including the ALAC and FLAC high resolution audio formats, played at 24-bit, 96kHz.

Its frequency response, finally, is claimed to be a respectable 50Hz to 20kHz - though here again it loses out - potentially significantly - to the MS650’s 40Hz-20kHz.

Features TL;DR: Aside from not supporting 4K HDR passthrough, the MS550 is pretty much exemplary with its connectivity and source support. It’s easy to use, too. While its speaker specifications look good versus many rivals, though, they do fall substantially short of those of the step-up MS650. 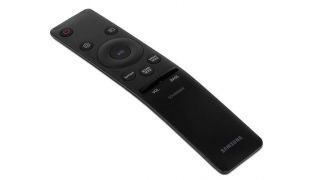 If you haven’t been lucky enough to hear the phenomenal MS650 in action, you might well think the MS550 sounds pretty good.

It achieves plenty of ‘throw’ from those six drivers, for starters, creating a sound presence far larger than you’d expect from such a compact unit. Impressively there even seems to be a strong sense of height as well as width to the sound stage, despite the MS550 not sporting any up-firing drivers. The speakers are sensitive enough to pick out even small details in the sound mix, and there’s a strong sense of left and right separation that works well with music as well as movies.

The mid-range sounds open and clear, which helps it deliver a fairly satisfying sense of swelling and expansion when required by an action scene.

It also joins Samsung’s other recent sound bars in hitting deeper bass frequencies than the majority of other soundbars in the same price bracket. 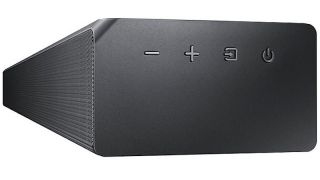 The issues with the MS550 come when you consider how far it falls short of the MS650. For instance, while dialogue is presented with a reasonably rounded tone, it feels a little vaguely positioned in the mix at times versus the stunning precision delivered by the MS650’s dedicated centre channel.

Next, while bass isn’t bad by general soundbar standards, the MS550 can’t go nearly as deep as the MS650. Worse, the bass doesn’t integrate as cleanly and effectively into the rest of the soundstage as it does with the MS650. With movies it tends to sound a little forced and muffled versus the other sound elements. This draws undue attention to itself and even, occasionally, starts to sound a touch distorted, despite the best efforts of Samsung’s distortion-cancelling technology.

The difference in bass prowess is as apparent with music as movies, with the lowest song basslines tending to sound like they’re cramping the mid-range’s style rather than correctly slotting in below the mid-range’s bottom end like they do on the MS650.

Performance TL;DR: The MS550 produces a wide soundstage and delivers plenty of detail and a reasonably open mid-range. It falls way short of the MS650 with dialogue and bass handling, though.

While the MS550 certainly isn’t bad value at £399, in truth the main thing we took away from it was an even bigger sense of just what great value the MS650 model is. The step-up in performance that model delivers is worth way more than a mere £100 difference. 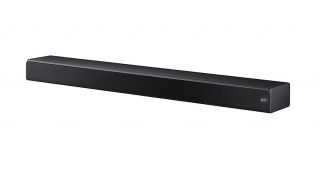 Other soundbars to consider

If you really can’t afford more than £400, the Q Acoustics M4 is worth considering. It offers a more refined, musical, balanced sound for around £329 - though it doesn’t go as loud as the MS550, doesn’t offer as many connection options, and doesn’t create such a wide soundstage.

Really, though, the main competition for the MS550 is Samsung’s own MS650, which delivers a whole other stratosphere of sound quality for just £100 more.

The MS550 is in itself a decent enough soundbar for £399. It supports an impressive range of audio sources, and is beautifully put together for its money. It also produces a large sound stage for a sub-£400 single-body soundbar - and aside from some occasional bass muffles, it controls that sound stage surprisingly well.

The problem for the MS550 is how far short it falls of its own MS650 sibling. The extent to which the MS650 steps up its game over and above the MS550 is, for us at least, worth way more than the £100 difference in price. So if you can afford to make the leap up, we strongly recommend that you do so.
Posted by Unknown at 10:17