For CES 2018, Dell has brought with it not only the newly revamped Dell XPS 13, but also a brand-new take on its larger model: the Dell XPS 15 2-in-1. This revision not only features more powerful innards across the board, but never-before-used inputs for an even more modern feel.

Considering we already quite liked the previous XPS 15 model, giving it a 360-degree hinge and an optional 4K Ultra HD display powered by 8th-generation Intel Core processors with AMD Vega graphics built-in should only sweeten the deal. We’ll reserve full judgment for a complete review, but know that Dell has quite a versatile powerhouse on its hands. 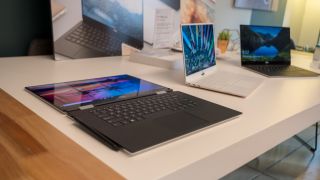 From there, Dell offers all sorts of configuration options, like a 4K Ultra HD (3,840 x 2,160) touchscreen to an Intel Core i7-8705G processor with Radeon RX Vega M GL graphics.

Dell can also up the RAM capacity to 16GB as well as the SSD storage capacity to as much as 1TB. Of course, Dell has yet to reveal the pricing scheme of these higher-end options. 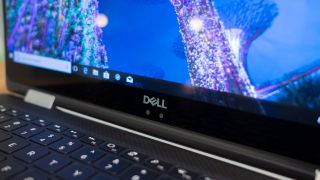 Frankly, there isn’t much that’s visibly different about the XPS 15 2-in-1 from the smaller XPS 13 2-in-1 that Dell introduced at last year’s CES, beyond its obviously larger dimensions. Dell seems to have found a design that works and is sticking to it.

You’re getting the same silver-colored anodized aluminum lid and base with the carbon fiber keyboard rest that has released on prior XPS 15 models, this time with aluminum hinges that rotate 360 degrees.

However, something about the keyboard feels notably different, but more on that in a moment.

The laptop weighs 4.3 pounds (1.97kg) to start, with higher-end options likely to add a few ounces. To us, the laptop doesn’t feel much heftier than a 13-inch MacBook Pro – impressive for a 15-inch laptop with a touchscreen.

Given this laptop’s size and lightness, we’re surprised by the selection of ports Dell has managed to make available within the XPS 15 2-in-1: two Thunderbolt 3 and two USB-C 3.1 – all of which support charging and DisplayPort – a microSD card reader and a headset jack. (It’s sad to see the USB of old bite the bullet, but perhaps Dell held off long enough.)

What has made this incredibly diminutive size possible is two-fold. 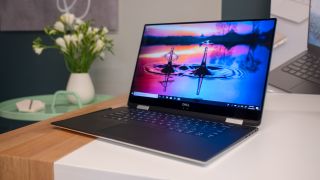 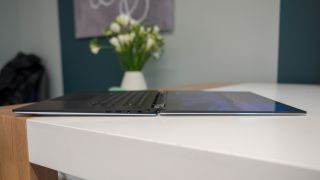 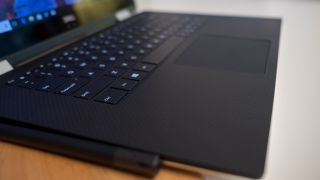 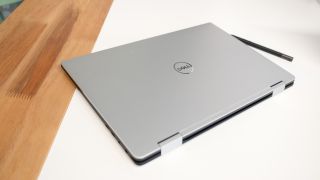 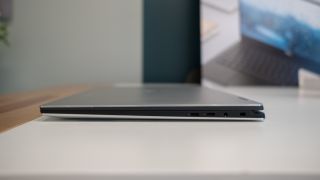 First is Dell’s use of its next-generation InfinityEdge display with a new 1,500:1 contrast ratio that makes blacks all but disappear on the screen. This nearly bezel-less display frame allows a laptop that’s just 13.9 inches wide to house a screen that’s 15.6 inches wide diagonally. Beneath said screen is a 720p webcam paired with an infrared lens for secure Windows Hello login – and it’s centered just like the new XPS 13.

Second is a brand-new keyboard technology that allows the base to be thinner than what was possible before (it also makes for more room inside for stronger thermal management). This new keyboard tech is known as maglev – kind of like those bullet trains in Japan, but applied at a much, much smaller scale. This maglev keyboard employs rare-earth magnets beneath the keys, rather than domed membraned switches like most laptops, mimicking the feel of a physical key response but with only 0.7mm of travel.

After typing on the keyboard for just a few moments, that shorter travel is apparent: it’s definitely not a 1:1 simulation of standard laptop keyboard behavior. The keys are more rigid in their response, and don’t allow for moving between keys as quickly as we’re used to – or at least how we’re used to.

It’s tough to bear judgment down upon the keyboard without more testing, but what’s clear is that it will present a learning curve to users. How long it will take to get over said curve is difficult to say. At any rate, it’s an impressive innovation that’s allowed for a mightily thin and light device with a comparably large screen.

All told, the glass-coated, Microsoft Precision touchpad remains unchanged and is as delightful to use as ever. 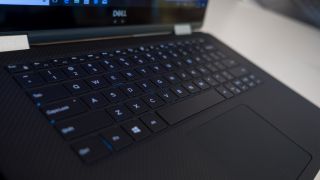 This new keyboard technology also allowed Dell to introduce more thermal headroom for the XPS 15 2-in-1 components, as well as a new type of insulation from Gore. This insulation directs heat out of the device better than other solutions to allow components to operate at higher temperatures.

The new Intel-meets-AMD processor that Dell has placed inside the XPS 15 2-in-1 makes liberal use of this extra headroom, thanks to a new sensor hub that determines performance based on the use case at hand in regards to cooling and power. This sensor hub works in tandem with software on the processor to make those decisions for you as you’re using the laptop.

The end result is a 15-inch laptop with a solid amount of headroom with which to perform either more serious tasks, like photo and video editing, as well as more moderate tasks at once. Not to mention some light gaming, judging by Intel and AMD claiming Nvidia GTX 1050-grade game performance from its collaborative processor.

While we can’t say for sure what all of these changes has afforded the XPS 15 2-in-1 in terms of power, we at the very least know Dell has laid the groundwork for one helluva performant laptop, which can also be used as a tablet. Oh, and Dell claims it can last up to 15 hours on battery – we’ll just see about that in our full review. 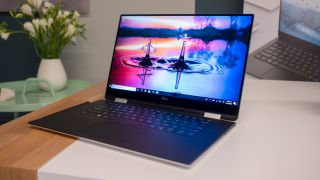 It’s this editor’s personal preference to avoid most 15-inch laptops on account of their size, but the Dell XPS 15 2-in-1 may very well change that. After all, it may as well be a 13-inch laptop, thanks to the latest InfinityEdge display.

That said, we are as put off by the feel of the new maglev keyboard as we are impressed by the innovation that has allowed such an approachable 15-inch device. While it will certainly present a learning curve, for how long? And, how will it feel, say, a week or two after purchase?

So, while we’re mightily impressed by the ‘smallest and thinnest 2-in-1 device of its size,’ thanks in no small part to a hugely expanded power profile (but mostly its size and feel), we’re left with a few hanging questions. Stay tuned for a full review later this year.
Posted by Unknown at 16:20