The front-runner in wearable devices is hoping the Fitbit Ionic will draw in some of the lost interest in its brand and a tech category that"s lost most of the public appeal.

Their latest “space-themed” smartwatch ($299.95) is $30 more than that of their major competitor: the Apple Watch Series 2. That"s definitely a hefty amount to ask from the people who might own a smartwatch already or who would think twice before investing on a new one who just showed up on the market after a while. 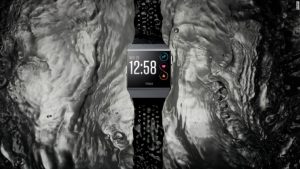 The even irresistible tidbit is that Iconic has everything we’d expect from a fitness device: sleep and activity track rate monitor, GPS integration, smart notification and a seriously long battery life –which they market as their biggest selling point in the face of Apple’s comparatively low battery life. The battery will last up to four days, compared with Apple’s 18 hours.

The waterproof number comes along with tempting features for the fitness buffs too –a sensor that measures oxygen in the blood and customized workouts that fit you well.

You can even set up workout goals, such as running an extra mile even faster. Listen to audio coaching and store up to 300 songs on the device. The cherry on top is that the Iconic features a payments system named Fitbit Pay that needs just a tap to pay at the checkout.

The Iconic marks Fitbit’s first hardware and software. The Fitbit OS was built in-house which according to the vice president of design Jonah Becker was inspired by “space journey” and “progressive thinking that gets you to a destination” .

The Iconic features a lightweight casing made of aluminum and a colored spherical screen.

It’s no doubt that Fitbit is late to the smartwatch marathon and it is also unclear if it can fix that. But CEO Park stated that Fitbit is the "best positioned company to have the most profound impact on people"s health outside of the healthcare system."