The Infiniti Prototype 9 Concept Car is a Fantasy Come True

The design of the Infiniti Prototype 9 illustrates a modern take on a 1930s beloved Infiniti Grand Prix racecar. Except there were any Infiniti racecars in the 1930s.

Nissan’s global head of design, Alfonso Albaisa said that Infiniti Prototype 9 was originally meant to be on blue prints. Funnily enough it was just an idea someone sent him in a text message that he sketched out. The idea was definitely too good to be on paper. 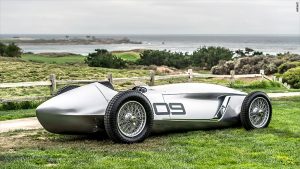 The concept was inspired from the likes of Germany’s popular Silver Arrow cars built by Mercedes-Benz and Audi, Italy’s red Alfettas by Alfa Romeo and the vibrant blue Delahaye 145s from France.

The Prototype 9 looks every bit the part. The dimensions conform precisely to Grand Prix regulations of the time. It comes with a plus point. Prototype 9 is an electric car unlike the older cars.

The long hood is equipped with battery packs instead of combustion engine that helps run this beast silently.

The concept car has a top speed of 130 miles an hour. It is capable of picking up an impressive 60 miles in about 5 seconds from a stop.

Albaisa said he test drove this beauty in Japan where the designer, born in the United States to Cuban immigrant parents, now lives.

"To be honest, when I was going around the track, around the bank, I felt more like a bird than anything. A very low flying bird," he said. "It was silent. I could see the tires next to me, because the position of my head. It was almost poetic."

Albaisa further revealed that the most exciting thing for him wasn’t driving the car but watching it being built right next to production lines in Japan.