OurMine has been grabbing the news recently for a string of hacks into company networks and social accounts. They recently gained access to Vevo servers.

The background to the OurMine Hack

The hacker group posted a screenshot that outlined a conversation they had with a Vevo representative. Below is the screenshot. 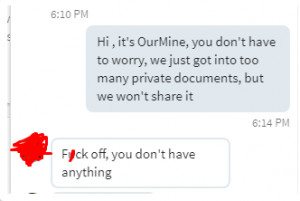 As a response, the hacker group dumped 3.1TB of data from Vevo’s servers. Gizmodo first reported this. The data was available through OurMine’s site. The data included Vevo’s private dossiers on 90 different artists, including Taylor Swift, Ariana Grande, One Direction and U2. Other documents included social-media strategy memos and instructions for disabling the office’s alarm system.

Even though they posted the data online, the group said they would remove the data on one condition. The condition was if they were contacted by a Vevo rep. it seems like the group kept to their word as the data was removed after a few hours. In place of the data, a message was kept. It said the following. “We deleted the files because of a request from VEVO.”

The group did not say how they got to the data. On the other hand, Vevo revealed to Variety that it happened due to “a phishing attack through LinkedIn.”

Vevo joins a long string of companies compromised by OurMine, which typically uses high-profile targets to drum up interest in legitimate security products. Last month, the group compromised both the WikiLeaks website and various HBO-linked social media accounts. In fact, previous targets in the past include Mark Zuckerberg, Sundar Pichai and Jack Dorsey.

The hacker group also brags about each hack on its website. Ironically it names itself a security group. It offers personal and enterprise security checks, with a $1,000 Paypal price tag for a website scan, and $5,000 when it comes to a full company audit.
Posted by Unknown at 04:04