Sick of a friend’s non-stop vacation photos? Bored of hearing about some business Page’s big launch? One of your groups won’t shut up about their upcoming get-together? Now Facebook has a Snooze button that lets you temporarily unfollow friends, Pages, or Groups for 24 hours, 7 days, or 30 days.

The Snooze button could deter people from permanently unfollowing, unliking, or unfriending things on Facebook, while still giving them control over what they see. Facebook benefits from you maintaining a dense social network, whether for ad targeting, or just surfacing an important life update from a distant acquaintance. So now when you’re annoyed with someone or something, you can solve the problem without severing the connection.

We spotted Snooze this morning on Facebook’s desktop site in the US, and are awaiting comment from the company about the status of the feature. We’ll update when we hear back. 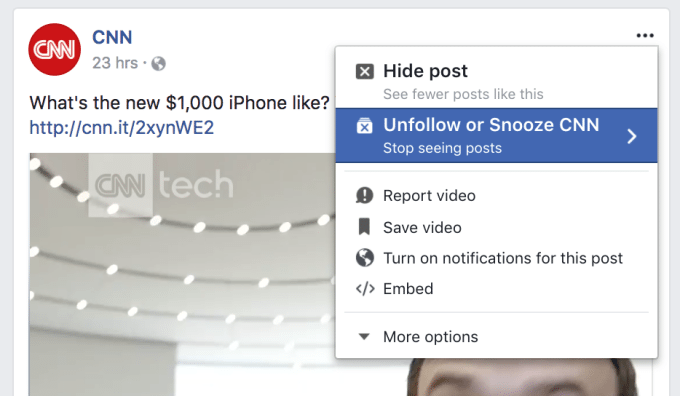 To Snooze someone, tap the drop0down arrow in the top right of someone’s post. Now instead of just an unfollow option, there’s “Unfollow or Snooze”. Tap that, and you can choose whether you want to Snooze someone for a day, a week, a month, or permanently unfollow them.

Facebook has been trying to settle in on the best way to let you control the News Feed without being confusing. In 2012 it offered a “See Less” option on friends’ profiles. But eventually Facebook found this was puzzling for users, since they’d still see that person in their feed, so it wasn’t clear if the option actually did anything. By 2014, Facebook had dropped “See Less” in favor of a definitive “Unfollow” button that let you stay friends but banish them from your feed.

With Snooze, it’s found a way to decrease the noise from a chatty person, group, or Page in a way that’s obvious and intuitive, but doesn’t prohibit Facebook from showing you their most important posts further down the line.

Pages and Groups may benefit from Snooze, since it could reduce the chances of someone unliking or leaving them. But it should also inspire them not to overshare or spam, otherwise they could be put in time-out.

Facebook already constantly modulates how much you see of someone based on implicit signals like if you Like, click, comment on, or share their posts. It will surely use Snoozing as a signal that it should show you less of someone when they’re allowed to reappear. But if we’re going to spend so much of our lives browsing the News Feed curated by Facebook’s faceless algorithm, it’s nice to see the company equip us humans with more than just binary controls.