Twitter for the first time is expanding beyond its 140-character limit, the company announced today. The social network says it will now try out a longer limit of 280 characters in select languages, including English, in order to allow people to share their expanded thoughts without running out of room to tweet.

The feature will initially be made available to a small group of users for the time being, as the expansion is considered more of a test than a large, public rollout for now.

The company says that it came to the decision to expand the character count because it realized the character count limitation more heavily impacted those tweeting in some languages — like English, Spanish, Portuguese or French — as compared with others, like Japanese, Korean and Chinese.

As the company explains via a blog post, the latter group could convey about double the amount of information in one character, compared with the former. Twitter then studied what that meant, in terms of tweet length in various regions, and found that only 0.4 percent of tweets in Japanese have 140 characters, but a larger (9) percent of English tweets did.

It also found that most Japanese tweets are 15 characters on average, compared with 34 characters for most English-language tweets.

Because of this, the new, 280-character limit will only roll out to those languages affected by “cramming,” which Twitter says is all languages except Japanese, Chinese and Korean. 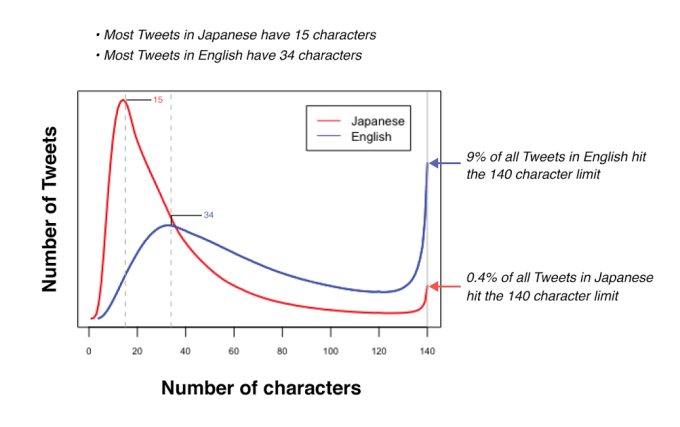 The change is a notable move for the social network, whose users for years have been debating the merits of an expanded character count.

While some have argued that doing so would make Twitter feel less restrictive and more likely to encourage longer conversations, others have said that Twitter’s focus on brevity is its biggest differentiator, and, in fact, the very essence of its service.

Twitter, for its part, has historically nixed the idea.

In more recent months, however, the company has started to distance itself from the 140-character limit — a move it made because the service is now regularly used to share posts that extend beyond just text. With Twitter’s ability to host photos, GIFs, polls, video and quoted tweets, it needed a way to allow users to both post media and their thoughts, all in the same tweet.

In Spring 2016, Twitter stopped counting that sort of media toward the character count, then this March more controversially changed the nature of how @replies worked on its service. Again, the goal with the change was to free up more space in tweets for users’ own thoughts and comments — this time, by moving the @reply out of the tweet’s text field to become a piece of metadata instead.

Alongside this change, Twitter is also updating the user interface so it no longer counts down the characters until you near the end. Instead, a circle will fill in as you approach the limit, and you won’t know how many characters you have left until only 20 remain (or 10 for Japanese, Chinese and Korean language users).

As to why Twitter is finally dipping its toe in the water of a longer text limit at last, that answer is stated in Twitter’s announcement.

“In all markets, when people don’t have to cram their thoughts into 140 characters and actually have some to spare, we see more people tweeting,” the company says.

(A Twitter spokesperson clarified to us that this understanding is not the result of having already publicly beta tested the 280-character count, but rather its observations of how different language users tweet. That is, in markets where there’s more room to tweet, people tweet more.)

The big picture here is that Twitter hopes that by making its service less confounding to use — with things like arbitrary character limits on tweets — more people will use Twitter. And “more people” is something the social network needs right now, given its flat user growth and declines in revenue and its ad business. 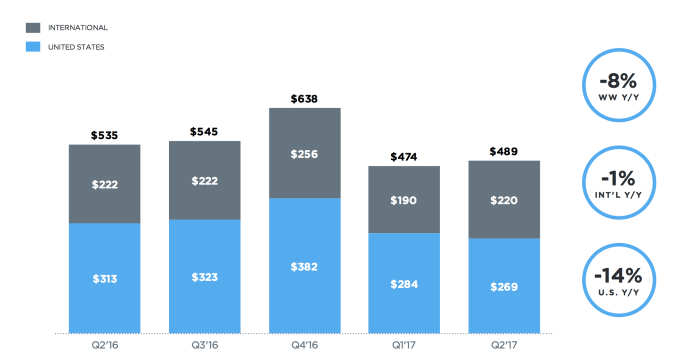 But at the end of the day, it may not be technical limitations or their removal that’s slowing Twitter’s growth. It’s the fact that, despite its efforts to crack down on abuse, many still see the social network as a too-public forum for attacks, trolling and other sorts of mistreatment. (This isn’t at all aided by Trump’s continued use of Twitter to broadly troll naysayers and make threats of war.)

Beyond this, Twitter has struggled to police its platform in other ways — like handling the bot problem, for example, or making sure that ads from neo-Nazis don’t show up.

It also has ignored a top product request from users for years: the ability to edit tweets. (But “never say never,” we’re told, when asked if this would ever arrive.)

Twitter says the new 280-character count will initially be available to a small, randomized but representative group of Twitter users on iOS, Android and desktop web. The test is not expected to last long — only weeks — before Twitter plans to make a decision regarding a broader rollout.