Your Facebook profile used to be the online version of “you”. But over the past year, Bitmoji has usurped Facebook to become the preferred way to share your identity over the web.

The Facebook profile assembles a collection of text and real-world photos into a fixed set of poses, making it more of a snapshot of the offline you ported into the digital realm rather than a vision of you purposefully designed for the Internet. It worked well enough for the desktop era when we asynchronously stalked each other’s online representations and had the time and screen space to consume a lot of information.

But the modern mobile era is more about communication than representation. We need succinct and flexible versions of our identity for rapid-fire messaging and visual storytelling. You can’t cram your whole Facebook profile into a video just to tell someone what you’re up to, but inserting just a profile pic feels generic and far from vivid. Facebook’s missing something.

Bitmoji let you communicate not just who you are, but what you’re doing and how you’re feeling in a single instantly recognizable image. With Bitmoji, you custom-design a cartoony avatar to look like your ideal self, and are then offered near-infinite poses of that avatar in any situation you could imagine, from blowing a kiss to flying a jetpack. You can then use these both within text messaging as well as photos or videos.

At first, way back in 2008, Bitmoji seemed like a joke. It was just a way to let you star in Bitstrips — little comic strips you could storyboard yourself. But most people didn’t need or have the time to make such involved content. Yet Bitstrips co-founder and CEO Jacob ‘BA’ Blackstock saw the potential early, telling AdWeek “It’s like you’re the medium.” 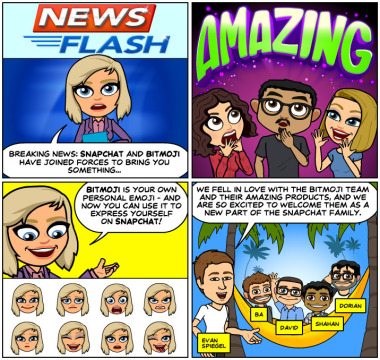 The breakthrough would come six years later when Bitstrips spun off a separate Bitmoji app that let you turn your avatar into stickers for use in messaging. They were personalized emoji. Still, by then social media had started to shift to visual communication via Snapchat Stories.

In one of Snap CEO Evan Spiegel’s smartest moves, the company paid just $64.2 million to acquire Bitstrips, and quickly integrated Bitmoji directly into Snapchat. Suddenly you could overlay your avatar onto your photos and videos, projecting your feelings and actions into social media. Regardless of whether you were camera shy, disheveled, or just couldn’t get the perfect photo of yourself, you could still communicate visually with your identity.

And for the 14 months since then, Bitmoji has hovered in the top 10 iOS App Store charts, often claiming #1 even above its parent company Snap or Facebook’s family of apps.

Despite Facebook’s willingness to clone Snapchat with Instagram Stories…and Facebook Stories…and Messenger Day and WhatsApp Status, it still has no rival to Bitmoji. That’s surprising considering communicating your real identity online is what allowed Facebook to vanquish Myspace and become a ubiquitous utility. It’s such an important concept, you’d think Facebook would fight harder to protect its dominance.

That’s not to say the company hasn’t been experimenting. The problem is it’s all been in VR.

Facebook’s Oculus division has developed a customizable avatar system. While there’s plenty of flexibility in how you choose your avatar’s face, hair, and clothes, they always come out looking like an 80’s sci-fi movie. These Tron-style avatars are fine for playing around in Oculus Rooms and other VR apps, but don’t feel particularly human or familiar. That limits their potential for communicating outside of VR or conveying realistic emotion.

Meanwhile, over the past few years Facebook has been gradually improving its own avatar system for Facebook Spaces, its VR hangout spot where you can chat with friends, visit 360 photo locations, and play basic games.

After some Minecraft-esque pixelated earlier attempts, in April 2016, Facebook revealed avatars drawn inside VR. It also told us it was testing using an Occipital Structure sensor to 3D model your head. By October, it was showing off much more life-like avatars with a “VR emoji” system that let you select “Angry” to make your avatar shake its fist, while “Joy” triggers a celebratory dance.

But in April 2017, the company previewed Facebook Spaces with avatars constructed by scanning your Facebook profile photos and tagged photos to create a facsimile of your real face.

First Facebook lets you choose which of your photos you want as the basis of your avatar, and creates its best guess at what you look like in VR from there. Then you stand in front of a VR mirror to customize your face, hair, clothing and more (or start from scratch if you don’t have a good photo to use). Facebook tells me the goal was to make it so hanging out in VR with friends is more like hanging out in person. Since then, Facebook’s added more hair options, lipstick colors, and t-shirt decals. 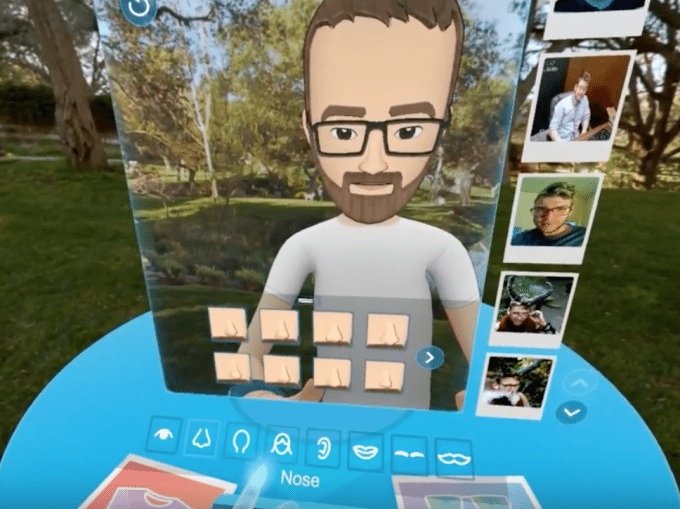 Yet you still can’t use the avatar you create anywhere else. And that seems crazy given Bitmoji’s success. Facebook’s old school 2D social network has a whole augmented reality camera platform, but no customizable avatars. Messenger has computer-generated photo filters based on the text you type, and Instagram has seasonal stickers and props you can paste atop your Stories.

But there’s still no substitute for Bitmoji. Whether Facebook builds a competitor itself or buys one like Gabsee’s 3D personalized ‘hologram’ avatars, it needs to do something. Maybe we’ll see its next move at tomorrow Oculus Connect conference.

Sure, at its core, Facebook wants you to be the real you. That’s how it drives trust and relevancy. You might be able to instantly recognize the Bitmoji of a close pal, but what about someone new you just met who sends you a friend request? Would you be as comfortable meeting someone on Facebook Marketplace and going to their apartment to buy their couch if their profile pic was an avatar instead of a photo? And will you be able to identify distant acquaintances at a glance in the News Feed based on a cartoon version of their face? 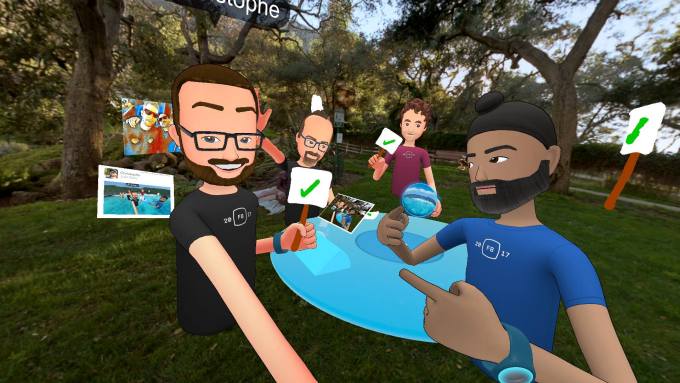 Perhaps not. But Facebook can’t let the ubiquity and utility of its core social network block innovation in its mobile communication apps. With Zuckerberg’s crew recently getting a handle on AR, Bitmoji is the last massively popular feature that separates Facebook from Snapchat, the bastion of teen cool.

And that’s not because Bitmoji are a silly toy or just the next step in the evolution of emoji. The Internet isn’t merely for sharing what happens in the real world. It’s a place where we can dream and aspire. Personalized avatars let our identity scale alongside our imagination. Facebook can’t let you communicate “you” anymore without them.
Posted by Unknown at 08:28