SwiftKey has been one of the most famous keyboard apps in the Android world. Back before quality keyboards such as Google’s Gboard existed, SwiftKey was available to help users attain a favourable typing experience. As Android refined itself, many other alternatives presented themselves. However, SwiftKey has always been one of the most downloaded keyboard apps. They have released plenty of updates to cater to the crowd.

Now in the beta version, the company has pushed out another much sought after feature. Now, users can put their own pictures as the theme for the keyboard. This update was pushed to users only last week. Android users of Google’s Gboard might find this feature familiar. Google’s offering has had this feature for quite a while.

How do you use this new feature in the SwiftKey keyboard?

The process to use this feature is quite simple and easy. All one has to do is access the gallery and upload the picture to the keyboard app. The next step is to adjust the brightness of the picture to a level you prefer. This is all you have to do. The picture you selected will be the background from that point onwards. As mentioned above, the process is quite easy to do. The app also has plenty of other themes you can make use of. 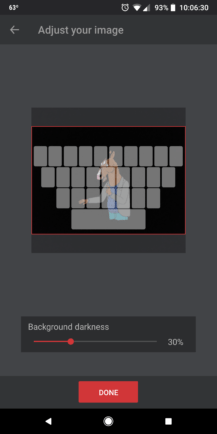 You will be presented with a few more options too. You can choose to remove the key outlines or keep them should you wish to. Displaying the “long-press” symbols above is another option you can think enable or opt out of.

The beta update brings another feature to the table. It has support for a new language. The new language is Ossetian. While it is not widely used by people, there are still plenty of people who can take advantage of this new language
Posted by Unknown at 06:15