Following authentication processes like thumbprint scanning, facial recognition, and QR code entry, a company in Japan this week has shown off a smartphone-based payment system that uses your unique palm print to confirm transactions (via Nikkei). Japanese credit card company JCB created the system in conjunction with Tokyo company Universal Robots, with a trial run aimed at company employees beginning next month.

This isn"t the first time palm scanning technology has been used for mobile payments, with U.S. companies Biyo and Keyo each launching their own versions of similar systems recently, although on a small scale. Those technologies require merchants to purchase special terminals that include palm-scanning cameras so that customers can pay with a hand wave at their stores, but JCB"s system only needs a smartphone camera and requires no specialized equipment. 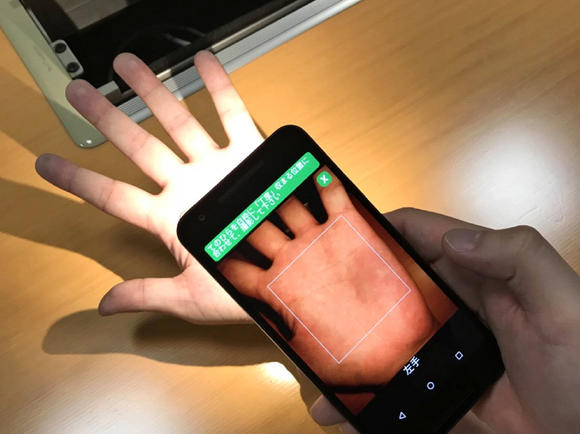 Image via Nikkei
"Customers would be able to leave wallets and phones in their pockets with a palm-based payment system, developed by credit card company JCB, that merchants could use with just an everyday smartphone camera.

After users register by snapping a picture of their palm from a smartphone camera, merchants or stores could scan customers" palms by smartphone to match them against registered data. With no specialized equipment needed, it would be easier for stores to incorporate the system, unlike a previous dalliance by JCB into palm-based payment that required a special terminal."

JCB"s system works by identifying registrants" hands based on the surface of their palms and the "distribution of veins underneath." Users register by taking a picture of their palm from an app on their smartphone and associating it with any supported payment information. Then, when at an appropriate store the merchant can scan the customer"s palm using a smartphone camera and the system will match the received data against registered data. This way, users wouldn"t even need to take out their own smartphone during the payment process.

JCB hopes the technology not only evolves into a widely used payment system, but also potentially "eliminates the need for cards and other forms of identification." The employee test is being enacted with the goal of exposing any security problems with the system, "such as fraudulent registrations or uses," as well as ensuring accuracy of the system. It"s said to misidentify users "only once in 100 billion times."

While palm scanning technology hasn"t been widely adopted, thumbprint and face scanning have become normal interactions for users around the world when paying for items with their smartphones, particularly on iOS devices. Apple"s Apple Pay began with Touch ID on iPhone 5s in 2013 and eventually came to MacBook Pro in 2016. With the launch of the iPhone X users are now paying for products with Face ID, which quickly scans their faces to confirm identity and then authenticates the purchase after being tapped to a compatible NFC terminal. Touch ID and Face ID can also both be used within apps.
Posted by Unknown at 06:30