How to get every Apple Watch Activity achievement badge & challenge

Among its many functions, the Apple Watch is a terrific fitness tracker and motivational tool for getting in shape or losing weight. One of the ways the watch motivates you, and something that is symptomatic of the gamified world we live in, is its system of achievements and badges: digital rosettes that pop up on the screen when you do something praiseworthy, and then hang around on your iPhone"s Activity app so you can show them off to friends. (Some badges even come with iMessage stickers.)

There are standard badges that can be earned at any time by burning a particular number of calories, working out for a certain amount of time and so on; and there are one-off challenges that have to be achieved on (usually) a single day. The latest challenge to be announced is for New Year 2018, however, and this lasts throughout January.

This article is for the hardcore: those of us who won"t be satisfied until we"ve earned each and every one of the available achievement badges for Activity on the Apple Watch. We list the badges, and we explain how to get them. 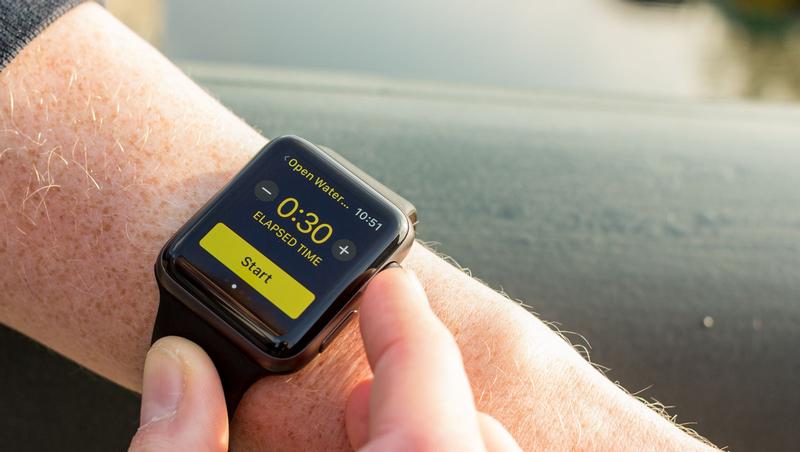 Reasons why badges are not being awarded

Before we move on to the individual badges, a few words on troubleshooting.

You may find that you satisfy the conditions for an achievement but discover that the badge has not appeared in your Achievements page. There are a number of possible reasons for this, some of them specific to each badge, but here are some general steps worth trying:

On to the individual badges. We"ll start with the standard badges that can be acquired at any time.

Most of these will be shown in the Achievements page (open the Activity app on the iPhone associated with your Apple Watch, then tap Achievements at the bottom of the screen) even before you earn them; tap one to see the requirements you need to satisfy in order to get it. But some will only appear when you earn them.

One of the easiest badges to earn. The first time you do each type of workout in the Apple Watch Workout app, you"ll get a badge: a gold outline of a star. For most types the workout will need to last at least five minutes to trigger the achievement.

We"ve got seven so far: cycling, elliptical, rowing, running, stair-stepper, swimming and walking. We believe there"s also one for wheelchair workouts (these will only be available in the Workout app if you open the Watch app on your iPhone, then go to My Watch > Health > Edit and set Wheelchair to Yes) and Apple may add further workouts in the future, as it did with swimming when it launched the Apple Watch Series 2.

The two types of swimming, running, cycling and so on are each grouped together as a single achievement, so you don"t get two separate badges by doing an indoor and an outdoor run, for instance. 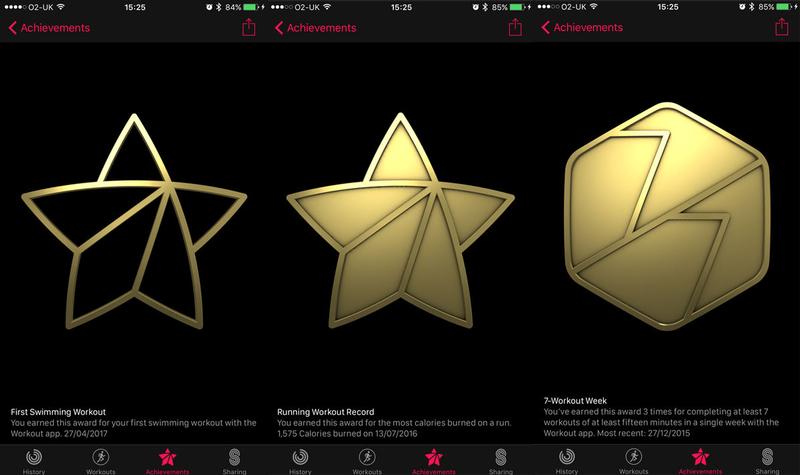 Slightly more advanced, and somewhat confusingly worded. For each First [X] Workout badge described above there is a corresponding badge (this time a filled-in gold star) for beating your all-time "calories burned" record for that workout type - but there are some complications.

First of all, you need to have done at least five workouts of that type. If the fifth workout, or any subsequent workout, burns more calories than every previous workout of that type, you"ll get the badge.

The canny badge hunter will therefore ensure that the first four workouts of each type are not too strenuous, so that they can be easily beaten in future.

(If you"re struggling to get these badges, you could try workouts that have a calorie-based goal and are at least 15 minutes long, as some users report that these help. If you"re desperate then by all means try these strategies, but we can confirm that it"s possible to get at least some of these badges using shorter-duration and open workouts.)

You need to do at least seven workouts in a single week, each of them at least 15 minutes long. If you"re struggling to achieve this, remember to include your walks.

Awarded each time you beat your all-time record for calories burned (the red Move ring in the Activity app) in a single day.

Like the [X] Workout Record badge, it needs to be "primed", in this case by using the Apple Watch for 10 days; after this point, any day"s activity that beats all previous calorie records will earn this achievement. 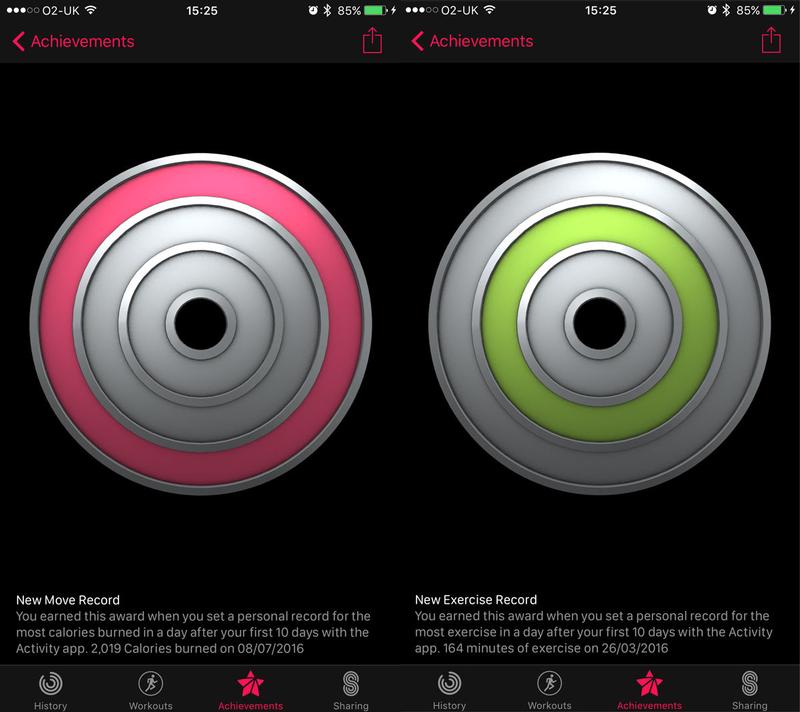 As above, but for the green Exercise ring - it"s awarded each time you beat your all-time record for minutes of exercise in a single day.

Again, it can only be awarded after you"ve been using the watch for 10 days.

Whatever daily calorie target you"ve set for the red Move ring, this badge will be awarded if you manage to double it.

Clearly, unscrupulous badge hunters can pick this up easily by setting the Move goal very low (open the Activity app on your watch and do a hard press, then tap "Change Move Goal"), but you"re only cheating yourself. Instead, why not go for a lovely long run? 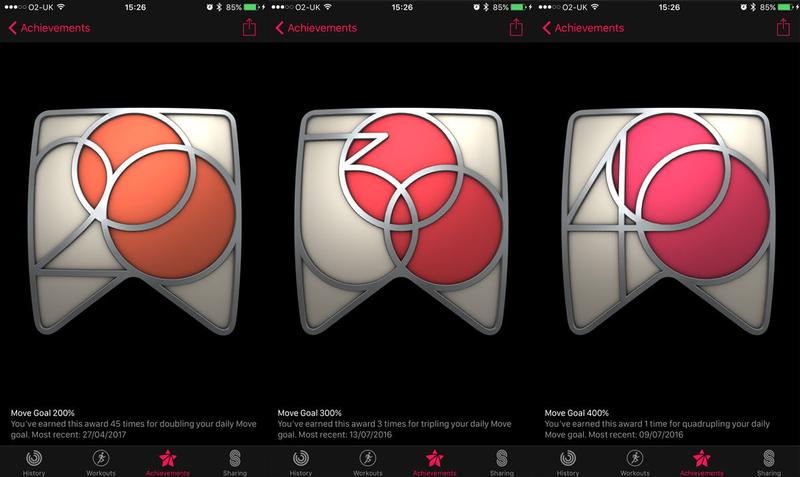 As above, but you need to triple your daily Move target.

As above, but you need to quadruple your daily Move target.

If your Move goal is at all realistic, this one will be really hard to get. We managed it eventually by going for a 25km run, and even then had to do some jogging on the spot in the evening to get the last few calories. Not easy!

When you first set up your Apple Watch you choose what Move goal to aim for each day. To get this badge, you just need to hit that goal once.

You"ll get the badge again each time you change the Move goal and then hit the new target. If you have weekly summaries activated, the Activity app will suggest a new target each Monday, based on how well you did the previous week. Alternatively, you can open the Activity app on your watch and do a hard press, then tap "Change Move Goal". 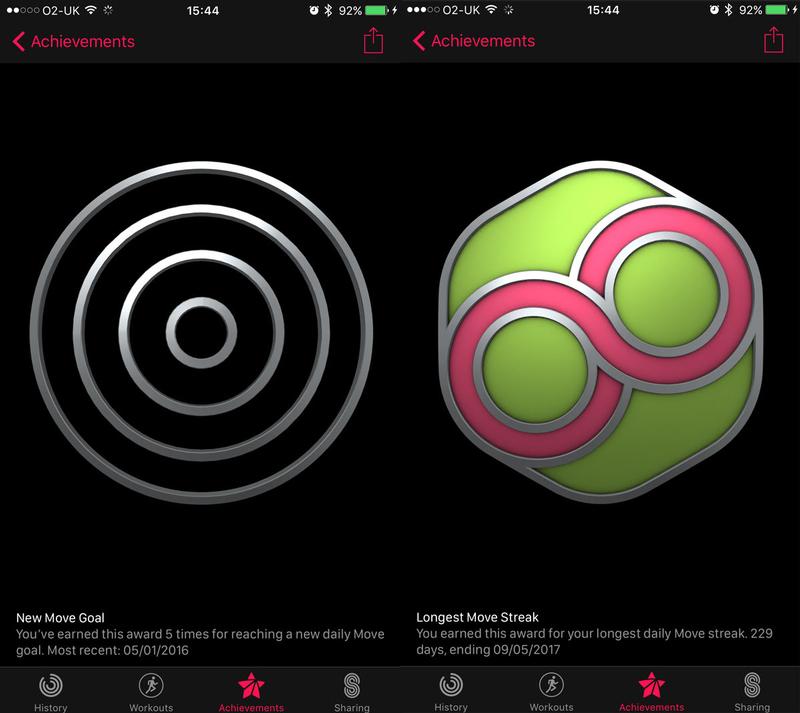 Hit your Move goal several days in a row and you"ll start building a streak. This badge will be awarded each time you beat your previous Move streak record.

Hit the Move calories target every day of a week, Monday to Sunday.

Hit the Exercise target every day of a week, Monday to Sunday.

Hit the Stand target every day of a week, Monday to Sunday.

Hit all three targets (Move, Exercise and Stand) every day of a week, Monday to Sunday.

Hit the Move calories target every day of a calendar month. (There"s no monthly badge for the Exercise and Stand targets.)

Unlike the Perfect Week achievements, which simply stack - I"ve got only one badge for Perfect Week (Stand), for instance, but if I tap on it I see it"s been awarded 72 times - there are separate badges for each Perfect Month, with each month a different colour. 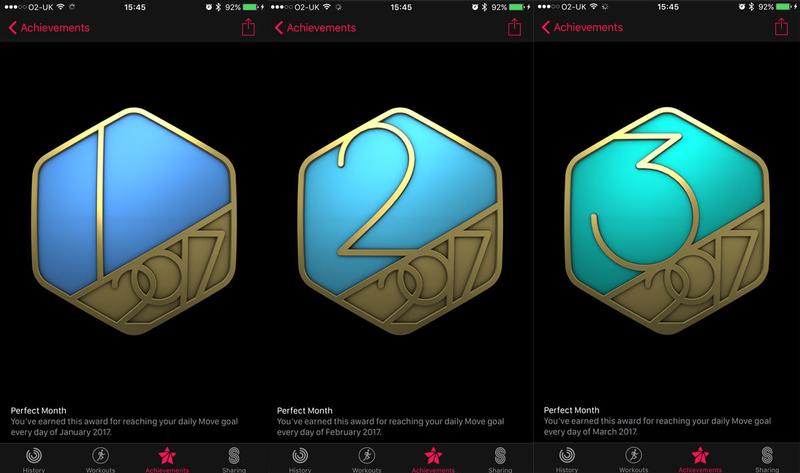 A more recent addition, the monthly challenges look almost the same as the Perfect Month badges but have the year in silver instead of gold. They"re a bit more interesting, too: each month there will be different requirements. These tend to be easier than hitting the Perfect Month target.

The November 2017 challenge, for instance, set a target number of Exercise goals for the month (and this was a lot less than 30). December 2017 asked for at least 3 workouts, which wasn"t asking a lot.

At first glance January 2018"s challenge looks more difficult: it"s set a target for total calories burned in the month that"s 10 percent higher than our total in December. Luckily that was quite a rough month thanks to Christmas and all those parties. 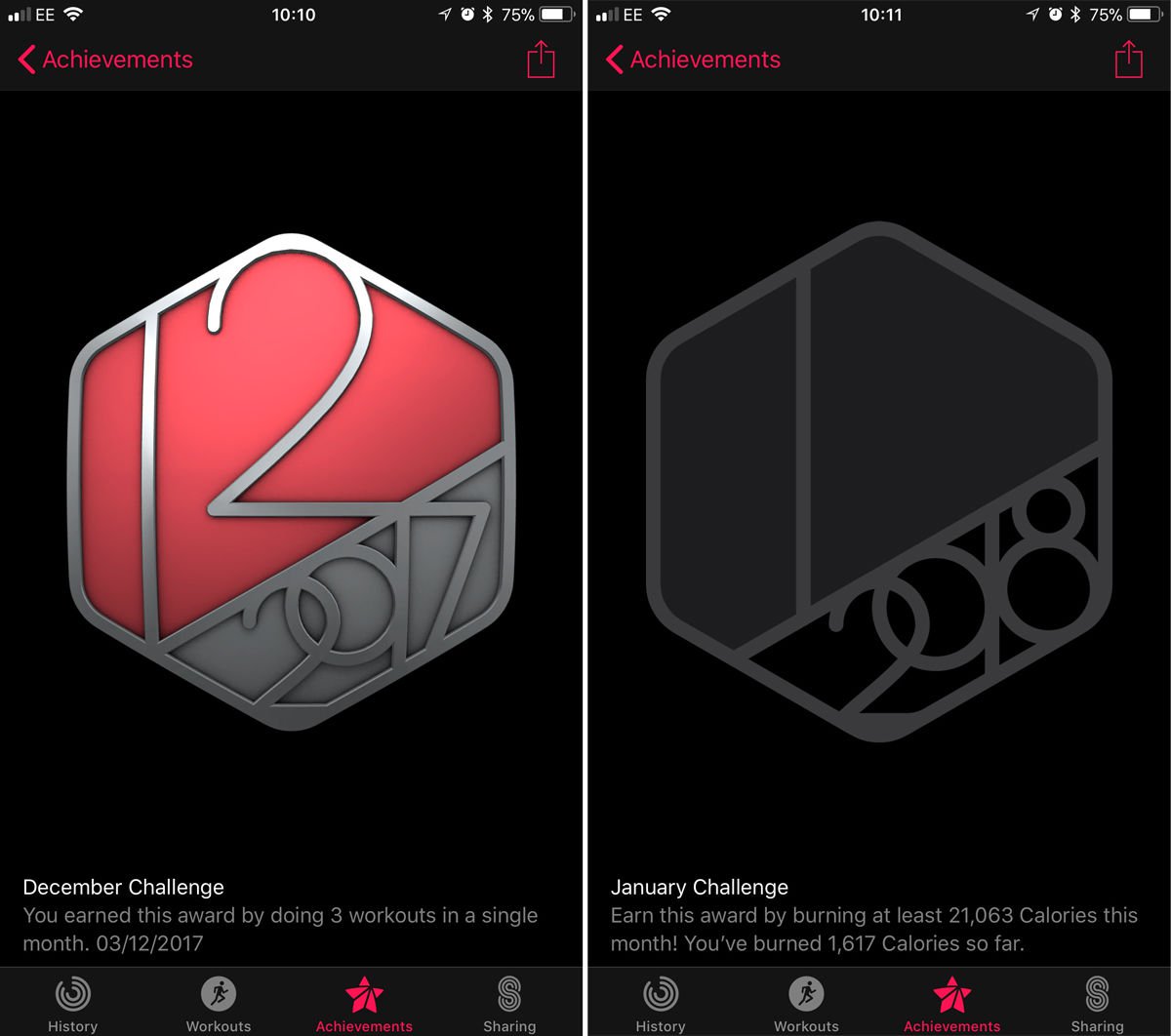 Hit your Move target 100 times. This doesn"t need to be a streak - you just need to have done this 100 times in total.

Hit your Move target 365 times. Again, this doesn"t need to be a streak, just a total.

Hit your Move target 1,000 times, in total. This is the one achievement I haven"t got yet, but then again, no one has - the Apple Watch hasn"t been around that long.

The badges above, with the exception of the specific month badges, are perpetually available: if you haven"t earned one yet you can satisfy its requirements in future. (You may have missed the April 2017 Perfect Month badge, but you can always pick up a virtually identical badge next April.)

But from time to time Apple announces special one-off challenges - achievements that must be earned within a particular time frame, and often on one particular day. You won"t know about them until shortly before the time (they tend to appear less than a week beforehand, although Apple pundits occasionally catch wind earlier that this) so you"ll need to move quickly.

Challenge badges appear at the top of your Achievements page, separated from the common or garden badges by a thin line. And as well as the badge, you"ll get an iMessage sticker you can use to show off to your friends. 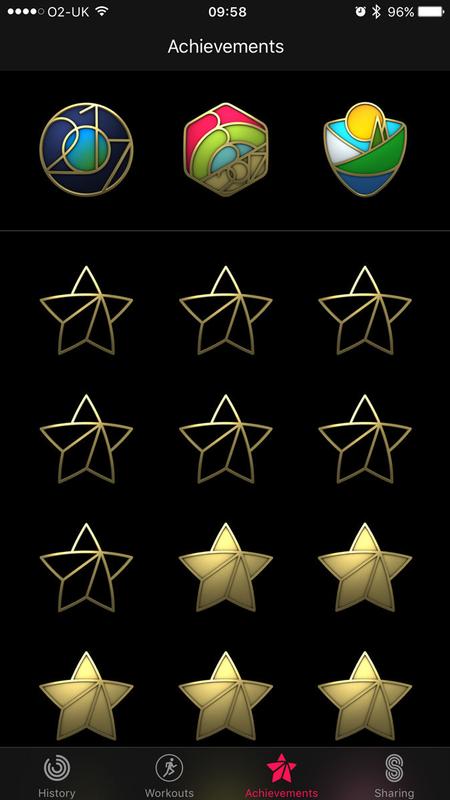 This was first awarded in January 2017 and is being repeated in 2018. To earn the badge you have to close all three Activity rings for seven days in a row in the month of January. 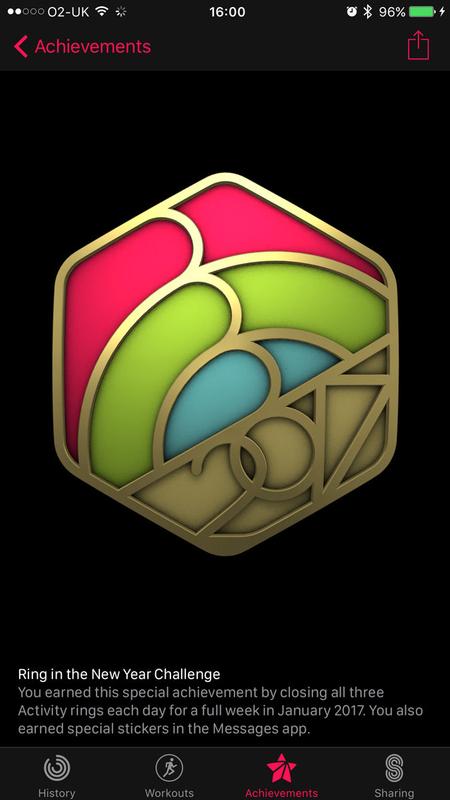 Like the Mother"s Day achievement this one was available only in the US, because even in the other country that celebrates Thanksgiving, it"s on a different day. This was also the first challenge badge to be repeated.

To get the badge you needed to do a 5K (or more) workout on Thanksgiving - it could be a walk, run or wheelchair workout. 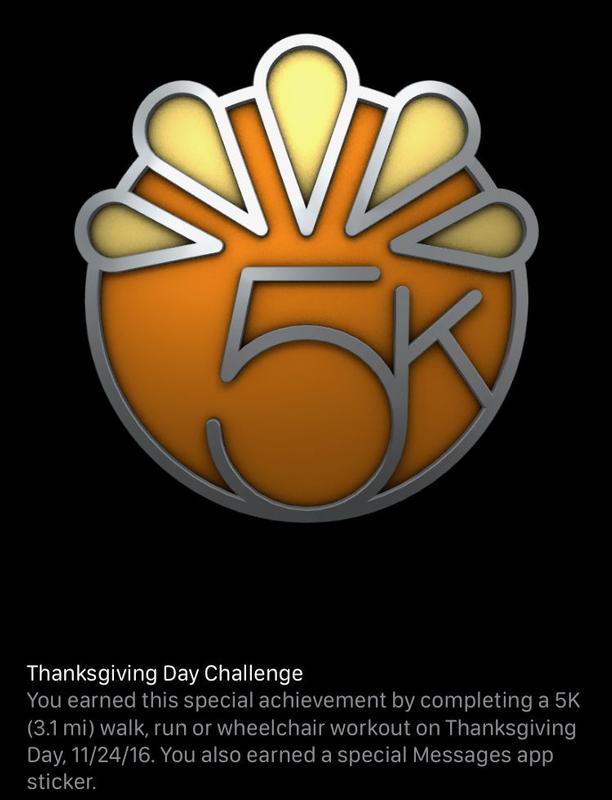 On 11 November it was possible to collect a badge in honour of Veterans Day. It"s a US-only badge, although we do commemorate Armistice Day on the same day here in the UK so perhaps something could have been worked out. 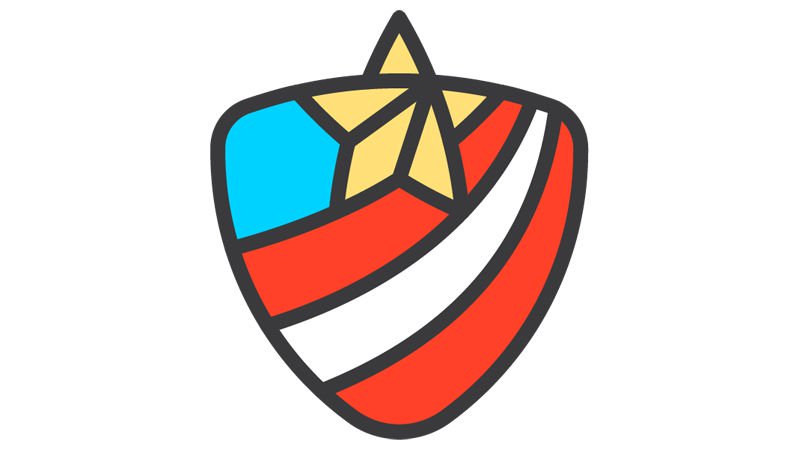 Why 5.6km? Apparently this is the distance from Old Faithful to Mallard Lake in Yellowstone National Park, a well-known hike. But despite these US-centric references, the challenge was available in the UK. 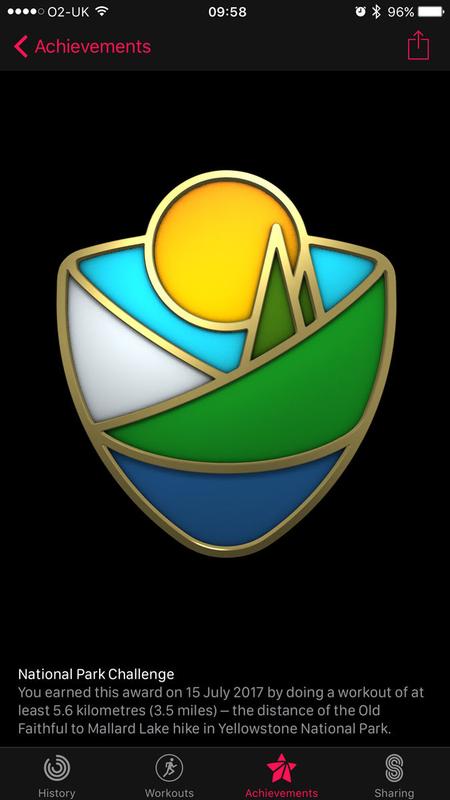 This took place on Mother"s Day in the US: Sunday 14 May 2017. (In the UK we celebrate Mothering Sunday on a different day; the next one is 11 March 2018. For this reason this badge was available to American Apple Watch owners only.)

You had to complete a walk, run or wheelchair workout of at least one mile on 14 May. This could be done using the Apple Watch Workout app, but it also worked with any third-party app that integrates with Health.

This was awarded on 22 April 2017 - Earth Day. Like the New Year challenge it may be available on Earth Day in 2018 as well, although Apple has not confirmed this. (Earth Day is always on 22 April, by the way.)

To earn the badge you had to do a workout of 30 minutes or more on Earth Day. 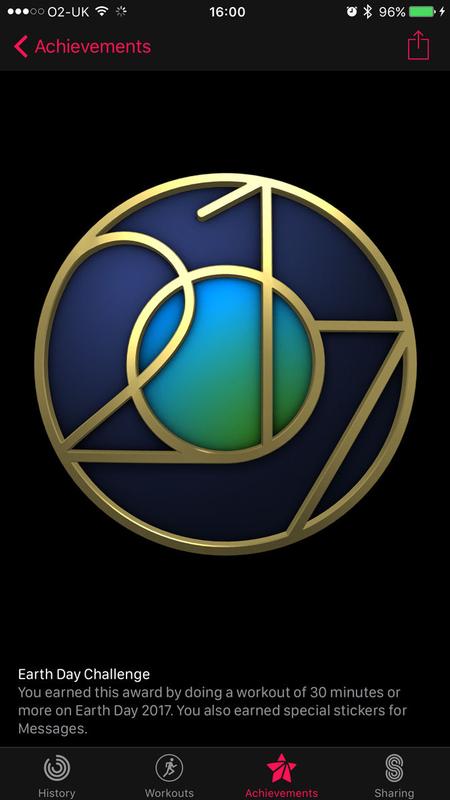