After a global test, Twitter has done the previously unthinkable and given virtually all users access to 280 character tweets. Long-form tweeting is now the standard for everyone, and the changes are in the process of rolling out to all users. Judging by the feedback of users, it seems that the web version of Twitter is updating faster than the app version.

The changes will be standard in nearly every language, apart from some Asian ones. Twitter in Chinese, Japanese, and Korean is staying at the 140-character limit, as those languages fit more into fewer characters. The average tweet length in Japanese is just 15 characters.

Twitter is framing the move as a logical progression of the platform, one that will help users express their thoughts without ruining the brevity of the platform. According to the company, just 5% of tweets sent during the trial period were over 140 characters, and only 2% exceeded 190. “We saw when people needed to use more than 140 characters, they Tweeted more easily and more often. But importantly, people Tweeted below 140 most of the time and the brevity of Twitter remained,” a Twitter blog post explains. 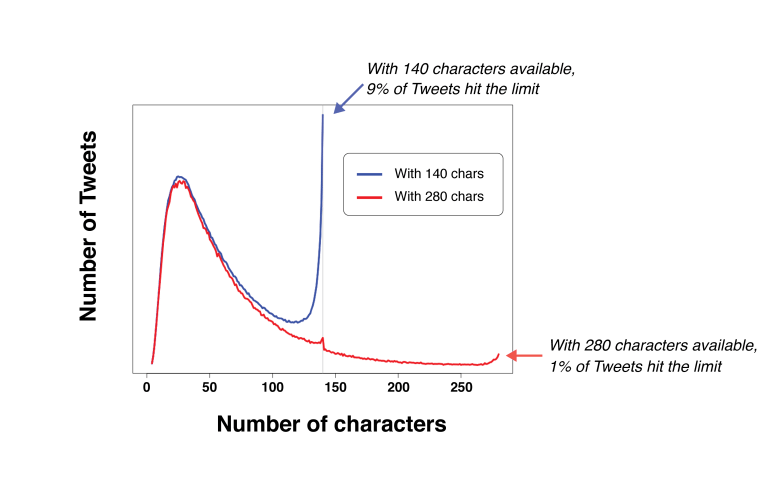 You’ll likely notice some changes to your Twitter feed immediately. As Twitter notes, people tend to mess around with new features a lot, so you can expect some mega-tweets at launch. “We expect to see some of this novelty effect spike again with this week’s launch and expect it to resume to normal behavior soon after,” the company says.