Although there"s always been a healthy interest in the premium end of the compact market, Sony’s decision to squeeze a 1.0-inch sensor into the RX100 four years ago gave the format a much-needed boost.

While such cameras have their limitations, and cannot always serve as a substitute for interchangeable-lens systems, the continuing improvement in the quality of their output, and their compact proportions, mean they’re often a first choice for general shooting – and sometimes more considered photography too.

Sony has enjoyed great success with its RX100 line, partly because of the sensor at the heart of these models but also thanks to the use of high-quality optics and advanced video functionality.

Rival manufacturers, however, have fought back with similar propositions. Canon’s PowerShot G7 X and G7 X II have been Sony"s main competitors to date, and now Panasonic has stepped into the ring too, with the LX10 (known as the LX15 outside the US).

This is the first model to sport the same combination of a 1.0-inch sensor, short but high-quality zoom lens, and a body that’s designed similarly to Sony and Canon’s alternatives

Of course, Panasonic is no stranger to enthusiast compacts, with its LX series of cameras often considered as some of the finest of their kind. Yet, this is the first model to sport the same combination of a 1.0-inch sensor, short but high-quality zoom lens, and a body that’s designed similarly to Sony and Canon’s alternatives.

Panasonic’s naming convention suggests the model is positioned above the now-discontinued LX7, which used a respected but ageing 1/1.7-inch type of sensor, and the still-current LX100, which employs the larger Micro Four Thirds type (but at the expense of size).

The LX10 is pocketable, replete with manual controls and has an impressive spec sheet; but does it offer anything different enough to its more established 1.0-inch-sensor-toting competitors to warrant serious consideration?

The Lumix LX10 is designed around a 20.1MP 1.0-inch CMOS sensor, the same kind that has been incorporated into Panasonic"s recent ZS100 / TZ100 and FZ2000 superzoom models. This captures images in a 3:2 aspect ratio as standard, over a capable sensitivity range of ISO125-12,800, with expansion settings down to ISO80 and up to ISO25,600 equivalents.

In addition to stills, the sensor records video in 4K quality, here in the 4K UHD format (3840 x 2160 pixels). This is captured at a maximum frame rate of 30fps, with 25fps and 24fps options also on hand, although if this is surplus to requirements, or you’re using a slower memory card, you can opt for Full HD recording at a variety of frame rates up to 60fps instead.

4K video recording is complemented by a whole suite of supporting and related options, such as the ability to pull 4K-resolution frames from footage and a 4K Live Cropping option that allows you to zoom into the scene and set the camera to automatically pan across, outputting the results at a Full HD resolution. 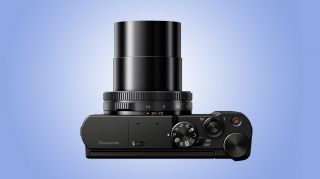 The lens travels between 24-72mm (in 35mm-equivalent terms), and has a respectably wide aperture of f/1.4-2.8. Its short focal range and wide maximum aperture indicates that this is a high-quality optic, a fact underlined by the presence of two dual-sided aspherical ED elements, four dual-sided aspherical elements and a single Ultra High Refractive (UHR) element.

The optic has also been furnished with a nine-bladed diaphragm to help deliver circular bokeh, and can focus down to 3cm from the subject when used at its wide-angle setting in a macro mode. Panasonic has also fitted it with an optical image-stabilisation system, which works in conjunction with sensor-based stabilisation to form a five-axis Hybrid OIS+ system.

The rear of the camera sports a 3.0-inch touchscreen LCD, with a 1.04 million dot resolution and the option to tilt it upwards and around a full 180 degree rotation so that it ends up facing the front. This action immediately brings up a handful of portrait-specific modes such as skin softening and slimming filters, both available in various degrees.

A handful of Photo Styles enable you to vary colour effects and to call upon monochrome options, and you can even create your own with a Custom setting. These are bolstered by a range of Filter Effects such as Expressive, High Key and Retro, and you can use these for both stills and video recording. 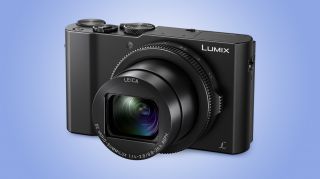 The camera employs a Light Speed-branded autofocus system, with Panasonic’s Depth From Defocus (DFD) technology also on board, with 49 areas as standard but manual adjustment allowing the focusing point to be positioned anywhere. You can do this by either moving the focusing point around the frame or by pressing the camera’s touchscreen to set this, and with the latter option you can expose the frame at the same time. You can also specify your own focusing areas for auto-area focus or call upon pinpoint focus for accuracy when shooting smaller subjects.

Continuous focus when recording both stills and videos, and manual focus with optional focus peaking are also on hand.

As we’ve come to expect from Panasonic, there are a raft of further options designed to make the photographer"s life easier, such as built-in Wi-Fi and in-camera raw processing. Particularly creative photographers can also call upon Time-lapse and Stop Motion animation options, as well as the further option to blend multiple exposures together into a single composite file.

Like Canon with the PowerShot G7 X Mark II, Panasonic has found space for a small pop-up flash within the top plate, although there"s no viewfinder, nor the option to use an external one on account of there being no hotshoe. A single door on the side of the body houses HDMI and USB ports – the latter allowing for the battery to be charged in-camera – while a door at the base provides access to a combined battery and memory card compartment.
Posted by Unknown at 03:59