Founded back in 2011, DroidVPN is a small and simple VPN for Android and – theoretically – Windows. The service website is basic and doesn"t make much effort to boast about its features. We suspect most potential customers would like to know more about DroidVPN"s servers, for instance, but there"s no information about this on the front page or in the FAQ.

The Server Status page reveals all, once you"ve found it, with multiple DroidVPN locations in Australia, France, Germany, Japan, Netherlands, Singapore, along with the UK and US.

You might wonder if the service supports torrents, and again the answer is well hidden. We had to scan the terms of service to discover torrents were allowed, but only on specific servers.

Curious about protocol support? We were, too. Digging down to an old blog post revealed that DroidVPN uses its own proprietary VPN protocol. Worryingly, there"s no information on how this works or what level of protection it gives you.

Some details are spelled out upfront, but they can be disappointing. DroidVPN allows only one device to be connected to the service at a time, for instance. Other VPNs typically allow up to five.

The service has a free plan available, but it limits you to locations in the US and Netherlands, and by default allows you only 100MB of data transfer a day. Fortunately, there are ways to extend this. You can activate an extra 100MB from your control panel, and earn more bandwidth by watching videos or completing offers (install and play a game, make an in-app purchase, and so on).

DroidVPN wasn"t impressing us with its features, but the paid service is undeniably cheap. A single month costs only $4.99 (£4), and gets you unlimited bandwidth and access to all servers. Pay a full year upfront and it drops to only $2.99 (£2.40), making DroidVPN one of the cheapest commercial VPNs around.

Handing over your cash could be more of a challenge, as there"s no card option available. But support for Bitcoin will appeal to many, and PayPal and Perfect Money are available for everybody else.

DroidVPN"s privacy policy is relatively short and tries to avoid complicated legal language, which works for us.

The structure of the document isn"t as successful. Logging is covered in two sections, for instance, each with slightly different information, leaving you to piece together the details and figure out what they really mean.

The document suggests that although DroidVPN doesn"t log activities normally, it may collect session logs including "IP addresses, times when connected to our service, the total amount of data transferred, and transfer speed information."

The company may not know what you"re doing online, then, but that doesn"t guarantee your future anonymity, as this privacy policy clause explains:

"If we receive complaints regarding copyrighted materials such as music and movies being shared over our network, we may be forced to take some measures to prevent legal actions towards our service. Such measures include filtering traffic in order to determine what account is misusing our service, and to terminate that specific account."

DroidVPN may work with a complainant to monitor the service and catch a user in the act, next time around. That"s not so unusual and most VPNs have strict policies about copyright violations, but it might be a concern for torrent users.

There"s a more general privacy issue in the lack of detail about DroidVPN"s custom VPN protocol. Is this some brilliant invention that"s even more secure than OpenVPN, or a feeble effort, full of security holes? There"s no way to tell, and that would make us nervous about using the service for anything important. 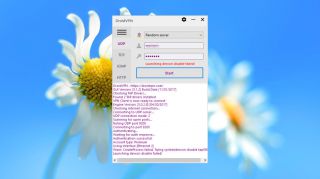 Signing up with DroidVPN starts by entering a username, password, and handing over your email address. Email validation is a little more fussy than usual, with addresses of the form name@accountname.isp.com not allowed, but enter a more standard address and you"ll have a welcome email within moments.

We started by downloading the Windows client. Initially, this looked very interesting. It"s a tiny 1.2MB ZIP file with no installation required, a very unusual touch, which could allow you to run it from a USB stick on any convenient PC.

Our enthusiasm faded when we launched the client. It looks, well, basic. Servers are displayed in a simple list, with no indications of load, no favorites system or anything else. There"s no kill switch to protect you if the connection drops, and you don"t get any control over DNS options and settings.

The client did at least look easy enough to use: choose a server, enter the username and password you created earlier, and click Start. But, no – a log pane showed what the program was doing as it tried to connect us, but this always ended in one of two ways: either a warning that it couldn"t launch a key program, or the simple message ‘server is full’.

We played around, explored, left the app and came back later, without any difference. Hitting the Support button on the menu gave us the less than helpful message that the ‘feature is currently unavailable’. The Support link on the website just pointed at the front page, and although there is a support email address, it"s another one of those details DroidVPN doesn"t display upfront. Tired of tackling someone else"s bugs, we took the only action we could – gave up on the Windows client and moved to Android instead.

Our mobile experience was quite different. The client looked better, with none of the previous low-level geeky detail. Tapping a Start button gave us a prompt for our username and location. The app was set up to select a random server, and a tap or two later got us connected, with no oddball error messages.

There were occasional problems with connecting to some servers, as we watched the client displaying repeated ‘trying port x’, ‘trying port y’ status messages. But you can easily switch protocols between TCP, UDP and HTTP with a tap, even ICMP if you have a rooted device (a very rare feature which could help you get connected where everything else fails), and this generally helped us get connected next time.

Network experts will love all the geek-level tweaking available in the Settings page. You can set local and remote ports, choose operating modes, define the HTTP headers sent (if any) with TCP connections, set MTU size, configure a proxy, even load and apply settings from an existing file (ECF/DCF).

There are other thoughtful touches that everyone might appreciate. In particular, the app can prevent your CPU or wireless sleeping to ensure the VPN won"t be disconnected. These options will drain your battery so are turned off by default, but it"s good to know they"re available if you need them.

Our performance tests* showed positive results all round. The free service managed 10-14Mbps on average, more than enough for general tasks. The commercial service maxed out at 35-40Mbps for UK to UK connections, reached a capable 24-28Mbps with US servers, and even the Singapore server managed a peak of around 20Mbps.

While this looks impressive, keep in mind that DroidVPN is using its own protocol, not the usual OpenVPN. Our guess would be this involves much less encryption overhead, and we would expect it to be faster.

DroidVPN"s site unblocking powers were reasonable, with the service allowing us to access streaming sites including YouTube, BBC iPlayer and Comedy Central. Netflix detected something was wrong and refused to stream anything, but that"s no surprise: most services struggle to defeat Netflix"s VPN detection.

DroidVPN seems amateurish in some ways, and the lack of support for standard protocols means we wouldn"t trust it with anything important. But it"s also fast, configurable and cheap, and could be worth a look if you need a simple Android-only service.

*Our testing included evaluating general performance (browsing, streaming video). We also used speedtest.net to measure latency, upload and download speeds, and then tested immediately again with the VPN turned off, to check for any difference (over several rounds of testing). We then compared these results to other VPN services we"ve reviewed. Of course, do note that VPN performance is difficult to measure as there are so many variables.
Posted by Unknown at 05:50