New Kindle? Load it with the best sci-fi and fantasy of 2017

Got an e-reader for the holidays? Lucky you! Welcome to a brave new world of cheaper books and the liberating convenience of slipping an entire vacation"s worth of reading into your back pocket.

Here"s our list of the 10 best science-fiction and fantasy novels published in 2017, in no particular order, that will keep you reading through and beyond the holiday period (don"t miss the bonus list of freebies at the end). 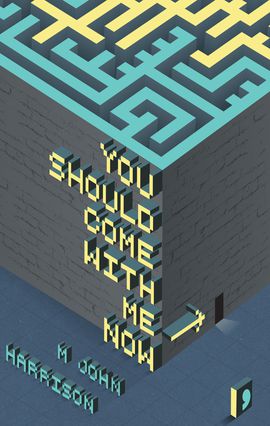 M. John Harrison"s first collection of short fiction in more than 15 years is an outstanding mix of strange, surreal and haunting tales. From pink-gray broccoli-shaped infestations bursting through the chests of Londoners, to the disembodied cries of men and women drifting through the night air, "You Should Come With Me Now" offers a delicious blend of unsettling yet beautifully crafted prose.

The 42 stories vary in length, with some flashing in and out over half a page, while others linger over 30 or more. Each is, in its own way, as impactful as the other, making for an unforgettable experience that will stay with you long after you"ve put the book down.

"Gnomon" is a difficult novel to categorise. Part sci-fi, part detective fiction, part mystery and part thriller, the book is set in a Britain in the near future that"s under constant and total surveillance. We follow Mielikki Neith, an inspector investigating the death of Diana Hunter, a cult novelist and former administrator who dies in custody after being interrogated by a machine that reads her brain.

Things then get very strange, very quickly. We"re introduced to a grandfather who must remember how to walk through walls, a corporation-eating shark, the jilted lover of St Augustine of Hippo and Gnomon, and a sociopathic AI from the future moving backward in time with murderous intentions. With over 700 pages it"s a bit of a slog, but well worth the effort.

Lyra Belacqua is finally back. "La Belle Sauvage" is the first installment in a new trilogy called "The Book of Dust," a prequel to "Dark Materials". Set 10 years before the events of "Materials," "Sauvage" centres on Belacqua and 11-year-old Malcolm Polstead. Devotees will be pleased to hear that in addition to Belacqua, alethiometers, dæmons and the Magisterium all make a return, along with a whole host of new characters and locations.

Pullman has described "La Belle Sauvage" as "more elemental" than "Materials" and as an equal rather than a prequel -- so even if you"re not familiar with "His Dark Materials," you"ll still be able to read the new book as a standalone novel. For fans of Pullman, this is a must.

In Kim Stanley Robinson"s much acclaimed science/climate-fiction novel, New York is submerged in water following the disastrous consequence of climate change. To avoid the floods, the city"s wealthier residents move to Manhattan, where the water levels are less treacherous. Here they live in skyscrapers, a bittersweet safe-haven from where those who haven"t perished are forced to watch the city drown.

The novel focuses on a number of disparate characters living in the MetLife tower on Madison Square, helping us to further understand the deluged city through the experiences and relationships between the tower"s inhabitants. The book"s scope is undeniably impressive and ambitious, exploring large and pertinent issues far beyond ecology, including immigration, capitalism and desire. Robinson"s world is a detailed and damning. It"s a wake-up call for us all, a stark and vivid reminder of the precariousness of human existence.

Set in the near future, Walkaway imagines a surveillance state ruled by a brutal, wealthy elite. It is a time of non-work, in which most jobs have been replaced by artificial intelligence and automation. Those who are out of work and not part of the wealthy elite are left in decaying cities that have been ruined by the man-made consequences of global warming.

Realising they have nothing to lose, a group of friends decide to leave this "default reality" and walk away from it all. The walkaways work together in their new communities, using 3D printers to create life"s essentials, including food, homes and even better printers. They soon discover how to prolong their lives indefinitely, resulting in a merciless crackdown by the ruling elite, ultimately leading to a bloody conflict.

Katherine Arden"s fantasy takes place in medieval Russia during what feels like a perpetual winter. We follow the life of Vasilisa Petrovna, a young girl who enjoys listening to the myths and legends told by her nurse while caring for the house-spirits that few others can see. When her step-mother and a visiting clergyman from Moscow forbid Vasilisa from harbouring these spirits, evil encroaches from the surrounding wilderness.

Vasilisa soon finds herself fighting for her life in a battle against a shapeshifting malevolent bear named Medved who feeds off the fear of humans. Along the way she encounters Morozko, the father of frost, as well as vampires, oven-dwelling house guardians and water nymphs. This is a truly enchanting debut from a talented writer who effortlessly blurs the lines between fantasy, fairytale and reality. Make yourself a cup of hot cocoa, settle into your favourite reading nook and lose yourself in this enchanting world of folktales and dark magic.

Set in the near future, the novel is told from the perspective of Jazz, a young Saudi-born woman who works as a porter-cum-smuggler in the first and only city on the moon: Artemis. But when Jazz gets mixed up with the wrong crowd, she soon finds herself spiraling into a conspiracy that gravely endangers both her and the residents of Artemis itself.

In "Artemis," Weir has created a fictional universe that captures the strange idiosyncrasies of life on the moon, while painting a world that"s familiar to us all through the strength of his characters and the depth of his research. It"s not great literature, but it"s not trying to be. If you liked the author"s first novel, "The Martian", you"re in for a treat.

Dr. Greta Helsing (yes, offspring of THAT Helsing) runs a unique medical practice. Rather than treating the living, she looks after a bizarre menagerie of undead patients. This includes caring for vampires, banshees and mummies, all of whom suffer from quite unremarkable ailments such as depression, vocal strain and entropy.

However, when an order of homicidal monks appear on the scene -- killing monsters and regular Londoners alike -- Greta is forced to act. She uses her unique skills to defend her practice, her customers and London itself. This is a fabulous debut and often very amusing. A great read if you"re looking for something a little more lighthearted.

When was the last time you read a great biotech apocalyptic novel with gigantic flying bears? OK, so the premise sounds ridiculous, but trust me -- "Borne" is more than worth your time for its imaginative characters, surreal narrative and its deeper themes about what it means to be alive.

Set in a ruined city destroyed by war and ecological disaster, we follow Rachel, a scavenger. The city is littered with dangerous creations, one of which is a giant predatory flying bear, left by a now abandoned biotech firm called The Company, making life perilous for all city dwellers.

One day, while scavenging, Rachel discovers Borne. Borne is a small green lump, to which Rachel feels unreasonably drawn. As Borne grows, so does Rachel"s attachment. Eventually Borne learns to speak and ultimately poses a threat to Rachel and the city as he begins to tip the balance of power and reveals that The Company may not be as abandoned as they first thought. If you like your fiction weird and weighty, you"ll love Borne.

It"s 1950 and WWII hasn"t ended. A group of subversive artists have detonated an s-bomb, causing surrealist works of art (known as manifs) to walk the streets in a twisted New Paris. Meanwhile, Nazis are attempting to raise demons from hell as they fight the resistance in an unending conflict.

A second narrative, set in 1941, follows American engineer -- and occult disciple -- Jack Parsons. The novel dips in and out of each time period, with the events of 1950 brought to light by the actions of the past.

This is a wild and outlandish book with so many references to the surrealist art movement that I"m not ashamed to admit I spent as much time Googling as I did reading this enthralling but deeply complex novel.

But that, for me, was part of the fun. While the page count is short, you"ll find yourself spending a lot of time with this rewarding slow burner.

Bonus list! Not quite ready to lay down some cold, hard cash for any of the above? No problem, there are some fantastic books out there that you can start downloading, right now, completely free. Here are some classic reads to curl up with this winter.

Top 10 science-fiction and fantasy books (that won"t cost you a penny):

"Journey to the Center of the Earth" by Jules Verne

"After London" by Richard Jeffries

"The Blazing World" by Margaret Cavendish

"The Iron Heel" by Jack London
Posted by Unknown at 10:47